Scientists say the Moon exerts a moderating influence on variations in the Earth's obliquity or tilt and this has a direct effect on our climate. 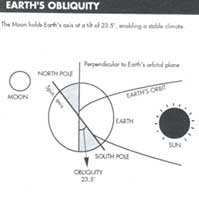 WERE IT not for the Moon, the climate on Earth would be dramatically different, say French geophysicists who have studied the effect on climate of the Earth's obliquity. The term refers to the angle through which Earth's spin axis leans away from the perpendicular to its orbital plane.

The obliquity influences the amount of annual solar radiation reaching the Earth's surface at a given latitude, and thus, its seasons.

Chaos is considered to be a common feature of planetary motion. The obliquity of Mercury, Venus, Earth and Mars also is chaotic, that is the angle varies with time, and in the case of Venus, the researchers say, it had no obliquity initially but its tilt is now believed to be 1780. J Laskar, F Joutel and P Robutel of the Bureau des Longitudes, Paris, have shown the obliquities of all planets in our solar system have evolved chaotically (Nature, Vol 361, No 6413) and while the obliquity of Mars is still undergoing large variations, the Moon's influence has stabilised the Earth's obliquity.

Besides obliquity, factors that decide how generously the sun shines on us include the Earth's precession -- the wobbling of its spin axis similar to that of a spinning top -- and the gravitational forces of other planets. The combined effect of the three factors, according to one theory, -- changes in obliquity, spin axis and gravitational forces of other planets -- on the amount of solar energy received by the Earth could be the cause of a succession of ice ages in the recent geological past.

The Earth's obliquity is a modest 23.50 but the resulting seasonal variations are sufficient to cause the annual migrations of many bird and animal species. Given that variations as small as plus or minus 1.30 in the Earth's obliquity can trigger ice ages, the Moon's stabilising role is critical because had obliquity not been under check, it is possible that life would never have emerged on Earth.