New measurement techniques show the level of atmospheric oxygen is decreasing in direct proportion to the burning of fossil fuels. These techniques allow scientists to monitor how much carbon dioxide can be absorbed by the oceans. 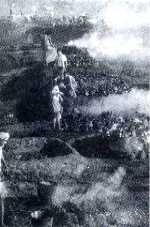 WESTERN scientists report the burning of fossil fuels is steadily depleting the oxygen content of the atmosphere. And, because the level of oxygen varies inversely with that of carbon dioxide, the new techniques of oxygen measurement provide them also with clues to the carbon cycle. But the scientists are struggling to balance the carbon budget in nature, because they are unable to determine precisely how much carbon dioxide is produced and how much is absorbed by natural systems every year.

Preliminary results of oxygen measurements in the atmosphere show despite deforestation and land-use changes that Western governments hold responsible for increasing carbon dioxide levels -- and consequently, global warming -- terrestrial greening may actually be compensating for the imbalance in the carbon budget (Nature, Vol 358 No 63009).

To evaluate how much carbon dioxide produced by burning fossil fuels such as coal, natural gas and oil is absorbed by the oceans and how much by photosynthesis in plants, it is necessary to determine the rate at which the stock of carbon in terrestrial vegetation and the organic constituents of soil is changing. Deforestation reduces tree carbon stock and agriculture lowers soil carbon levels. Scientists concluded, therefore, that these carbon reservoirs, or sinks, are shrinking and thereby contributing to increasing levels of carbon dioxide in the atmosphere.

But, scientists also concluded the observed increases in atmospheric carbon dioxide and the calculated oceanic carbon dioxide were together lower than the amount of the gas put into the atmosphere by burning fossil fuels. This led them to think the carbon storage in land-based sinks may actually have increased, despite deforestation and farming practices. They say plant growth has increased, spurred by higher carbon dioxide levels and anthropogenic nitrate and ammonia nutrients.

Using a new technique to gauge changes in oxygen levels by measuring changes in air samples of the oxygen-to-nitrogen ratio (nitrogen is less variable than oxygen), Ralph F Keeling and Stephen R Shertz of the National Centre for Atmospheric Research in Colorado, could determine the amount of carbon dioxide absorbed by the sea. Dissolved carbon dioxide forms carbolic acid, which reacts with carbonates in the water, absorbing more atmospheric carbon dioxide without consuming oxygen.

Keeling and Shertz collected air samples from three sea-level sites and found significant seasonal variations in the oxygen-to-nitrogen ratio at all sites. At La Jolla in southern California, a decrease over the years in atmospheric oxygen was clearly evident. The rate of decrease was equal to the rate of oxygen consumed to burn fossil fuels. Firstly, this implies that the net carbon from forests and farmlands is zero, say the authors. Secondly, the data suggests that the oceans are a sink that absorbs upto five billion tonnes of carbon every year.

In another study, Paul Falkowski and Cara Wilson of Brookhaven National Laboratory in New York, tried to estimate changes in the biomass of phytoplankton -- small organisms found in the upper layers of oceans. In a steady state, phytoplanktons fix upto 50 billion tonnes of carbon each year. If the productivity of oceans was changing, these reactions would influence the presence of carbon dioxide in the atmosphere. But their analysis of the North Pacific Ocean shows though there may have been some changes in phytoplankton productivity, they are unlikely to have affected atmospheric carbon dioxide levels.

J Robertson of the Plymouth Marine Laboratory and A Watson from the School of Ocean Sciences, both in the UK, have quantified the effect of "thermal skin" -- which is 0.3oC cooler than the water below -- and found that estimates from various models of carbon dioxide absorption by oceans can be brought into closer agreement by taking into account the 0.7 billion tonnes extra absorption caused by this cool "skin".