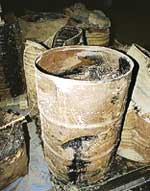 
In May 2005, the Bhopal High Court asked the Hyderabad-based Ramky Pharma Ltd to repack the chemical waste from Union Carbide's factory which caused the 1984 tragedy. Now non-governmental organisations (ngos) and activists have demonstrated that the clean up was a total sham. At a press conference in Bhopal on November 16, 2005, activists of The Bhopal Group for Information and Action, Bhopal Ki Awaaz and Greenpeace India, among others, presented photographic evidence of unsealed and unlabelled bags and drums with toxic tar leaking from them. Greenpeace India activists pointed out that bags that are actually meant to pack plastic chips are being used to re-pack the hazardous waste.

At the conference, supporters of the tragedy victims reiterated that toxic waste should be shipped to the us at the expense of the present owner of Union Carbide, Dow Chemicals. They also apprehended that technologies suggested by the Madhya Pradesh Pollution