Monsanto ups the Bt cotton ante with a feel-good survey 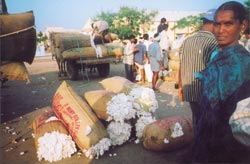 the more one reads about Bt cotton in India, the more confusing the issue gets. The latest in a series of claims and counterclaims is a survey of Mahyco Monsanto Biotech (mmb), which till recently was the only company that could sell genetically modified (gm) seeds in India. The survey "underscores the benefits of Bollgard cotton" (also called Bt cotton).

The survey was carried out by the Mumbai-based marketing research and information company ac Nielson org-marg for the 2003-04 season. It covered 3,063 farmers in five states (Andhra Pradesh, Karnataka, Maharashtra, Gujarat and Madhya Pradesh). "For us, it has been an enlightening experience to see, at first hand, the difference that Bollgard has made in the life of India's cotton farmer," gushes Rajiv Inamdar of ac Nielson org-marg in a press release. Among other things, the survey reports that the Bollgard cotton lint fetched higher prices in the commodities market -- an average premium of 8 per cent. In 2003, a report of the Andhra Pradesh government had shown that Bt cotton fetched prices lower than several non-Bt varieties.

mmb's cotton was approved for commercial cultivation in 2002. In the 2002-03 season, most reports/surveys showed bt cotton had not done very well and, in some cases, its performance was poorer than that of non-Bt varieties. Even reports of the state governments to the Genetic Engineering Approval Committee (geac), the apex regulatory body for genetic crops at the Union ministry of environment and forest, were not very encouraging. Among the explanations offered for this was that the cotton varieties mmb modified were not high yielders and that 2002-03 was a drought year, hence not the best time to judge the true potential of a crop. But then the 2003-04 season saw better rains and pest attacks were not the severest. Government reports showed that most cotton varieties did well. That means Bt cotton's ability to resist pests and require lower use of pesticides wasn't really tested this year. Besides officials inside the regulatory system say it is unfair to judge mmb's Bt cotton by the yield as its main function is to resist the bollworm.

So what is a good year to judge Bt cotton's performance? And who is to be believed? "It is Monsanto on one side and everybody else on the other," says Suman Sahai of Gene Campaign, one of the public faces of India's gm debate. Her organisation did a survey in 2003 that showed bt cotton's performance was poor. S Shantharam, formerly a regulator in the us who teaches a course on biosafety and knows India's biotech sector quite closely, says he finds the ac Nielson org-marg quite credible. "Notwithstanding that it was paid for by Monsanto, one should not lose sight of the fact that ac Nielson org-marg cannot put their credibility on line without doing an honest job," he adds.

What does the government say about it? geac is tight-lipped and says it has only preliminary reports from the states that will be finalised in one month. One preliminary report points out that Bt cotton should be grown only in irrigated areas (and not in drought-prone areas) because in the absence of assured irrigation, farmers would struggle to recover the high cost of the Bt cotton seeds.