Six new tiger reserves will be included in Project Tiger 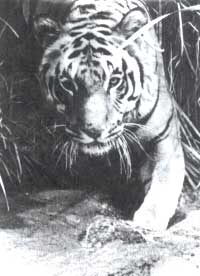 To CELEBRATE 25 years of Project Tiger, the ministry of environment and forests has decided to set up six tiger reserves during the Ninth Five Year Plan. This was decided at a recent meeting of the re-constituted steering committee of Project Tiger. Two sites have already been selected. They are Bhadra in Karnataka and Pench National Park in Maharashtra. Other sites which have been identified are Pakhui in Arunachal Pradesh, Sitanadi, Udanti, Bori and Satpura in Madhya Pradesh. "We have not finalised the other sites," said P K Sen, director, Project Tiger.

With this, the number of tiger reserves in India has gone up to 23. There are 33,000 sq km of reserves in the country and it would be increased to 50,000 sq km in the next five years, says Sen. The work on two reserves will begin this year with the final notification and the work for the others will begin early next year, he said.

But experts do not rule out the possibility of a conflict between forest officials and the local people at the time of implementing these projects. "There are conflicts everywhere," says M K Ranjitsingh, a member of the steering committee. Although Pench has been in the midst of a human-park conflict, where fishing has been a major issue, these issues are being sorted out, says Sen. He said that if the dependency of the villagers on the forest is minimised through development programmes, human-animal conflict can also be minimised.