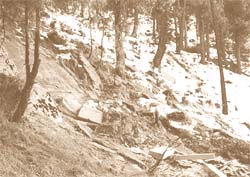 a thriving timber trade business is taking its toll on the forests of North West Frontier Province ( nwfp ) in Pakistan. Manshera district in Hazara division, one of the two main forested areas of nwfp , had a forest cover of 83,966 hectare (ha) in 1979. The cover had declined to 46,929 ha in 1988. In Sircan Valley, also in Hazara, according to one estimate, if illegal harvesting continues at the existing rate the green cover will be completely lost in the next 15-20 years.

Though contested by independent experts, official figures put the forest cover in nwfp at about 10 million ha or about 17 per cent of the total area of the province, most of it under local communities.

nwfp is the main supplier of coniferous timber or 'softwood' to the whole of Pakistan.According to the World Conservation Union, in 1989-90 nwfp 's contribution accounted for 65 per cent of the country's total softwood harvest. About 85 per cent of this is used for construction purposes.

To stop further deforestation, many experts propose implementing joint forest management ( jfm ). "To cope with the alarming situation, we need to adopt a community participatory approach to establish a scientific and sustainable system of forest management," says G M Khattak, a forestry expert and former vice chancellor of nwfp Agriculture University. Every official policy document prepared since 1992, when devastating floods hit Hazara and parts of Pakistan-occupied-Kashmir, has included the idea of establishing jfm committees. nwfp government announced the formation of these committees as far back as October 1998. It is another matter that they never saw light of the day.

So far, the only real measure aimed at curbing deforestation has been a ban on timber harvesting, imposed six years ago. Experts, however, believe that the ban will have a detrimental effect on the forests because harvesting of mature trees is essential. Also, the government has not provided any alternative to forest-dependent people.

Deforestation is affecting other parts of the country, too. The natural forest cover in Pakistan today stands at less than five per cent of the total geographical area. According to one estimate, Pakistan's forest area decreased from 141,530 sq km in 1880 to 67,310 in 1980 -- a decrease of 52 per cent in one century.