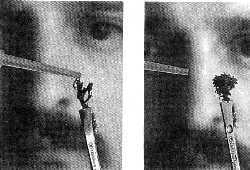 STAR MOSS, a primitive organism without roots or a vascular system that is common in the forests of North America, contains genes that could be used to engineer drought resistance in crops. Molecular biologist Mel Oliver of the US Department of Agriculture's Plant Stress and Water Conservation Lab in Texas discovered star moss is not only drought-tolerant, it can also recover after drying out completely (Science, Vol 257 No 5068).

The moss produces proteins that can repair massive cellular damage caused by drought within seconds. These proteins, which may have been lost by plants higher up in the evolutionary ladder, enable the moss to be revived by a few drops of water after years on dry ground. Eight to ten hours after exposure to water, the moss recovers its metabolism completely.

As it dries out, the moss probably makes a messenger RNA that directs the synthesis of repair proteins when it is rehydrated. Oliver has identified 74 proteins that are made as the moss recovers from drying. Scientists hope to identify the genes that produce the proteins, clone them and transfer them to wheat and other crops, enabling cultivation on arid lands that would otherwise require irrigation.