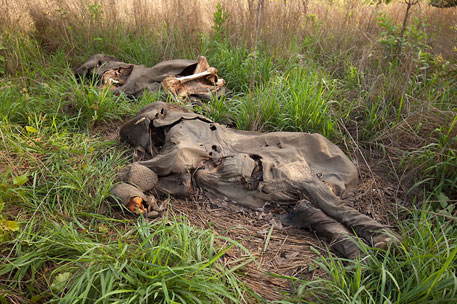 As wildlife in two African countries, Mozambique and Tanzania, continue to be threatened by poaching and illegal hunting, authorities are at a loss about how to contain these activities.

Despite the arrest of 14 suspected poachers in the first five months of this year and slapping of fines amounting to $880,000, poaching continues unabated in Mozambique. According to a report by the World Wildlife Fund (WWF), poachers have been using cyanide to poison the animals’ watering hole and food, particularly in the north of the country. The WWF report claims that between 2009 and 2011, the number of elephant carcasses sighted during aerial surveys more than tripled to 271 from 83.

Antony Alexander, project manager of the Limpopo National Park in southern Mozambique, is quoted by a local radio as saying that the system of fines is good only when it works. “Collecting fines is an incredibly time consuming and expensive procedure, involving lawyers and trips to Maputo because only five per cent of the fines have so far been paid out of more than $3 million imposed,” he said. He explained that half of the money collected as fines was spent on conservation work, while the rest was given to the field rangers as incentives. “The refusal to pay fines could be a disincentive when the rangers see no return for their work,” he pointed out.

To combat the continuing damage caused by poaching, the park is now considering new measures like introducing a dog unit to hunt down poachers.

The situation is no better in Tanzania. In fact, the fight over the legality of hunting has taken a bitter turn with a video surfacing in Parliament which shows a hunting company allegedly violating the regulations of wildlife conservation. The video was presented by a member of the Opposition, Tourism and Natural Resources shadow minister Peter Msigwa, to back his allegations of wildlife violations by the hunting company, Green Miles Safari. Msigwa alleged that the company had committed 11 offences, contrary to the Wildlife Conservation Act of 2009 and the Wildlife Conservation (Tourist Hunting) Regulations of 2010. He believes the video clip, titled “A Hunting Trip to Tanzania”, was shot by the company itself on one of its hunting blocks in Selous Game Reserve and was meant for publicity.

While presenting his case in Parliament, Msigwa accused the company of allowing its clients to shoot at female wilderbeest and young buffaloes, among others, while the law prohibits the hunting or killing of young and female animals, a media house reports. The law also forbids the capture of wild animals without a valid permit. Msigwa told Parliament he had evidence to prove that the hunting firm has been capturing zebra foals, young warthogs and black-bellied bustards. Clients of the company have been recorded on camera using semi-automatic weapons, particularly shotguns, in addition to weapons fitted with suppressors, which are illegal in game reserves and national parks, he said. According to the lawmaker, Green Miles Safari also allows underage clients to hunt birds in Africa’s largest wildlife sanctuary, which is against the law. He has asked the government to order a probe into the activities of all hunting companies in the country and penalise all the licenced firms which violate wildlife norms. He has also requested the government to revoke the licence of Green Miles Safari.

In response to his allegations, natural resources and tourism minister Lazaro Nyalandu told a newspaper that he has directed officials in the Wildlife Department to check the authenticity of the video clip and whether any offence has been committed. “I want to assure you that if our investigation established that the company has been violating our laws, we will not hesitate to deal with them, including taking back their hunting blocks,” Nyalandu said.

Meanwhile, a leading safari operator, on the condition of anonymity, told another media house that the future is in game-watching safaris, not in hunting. “Tanzania offers some of the best safari experiences in the world. It is a big asset, and we need to promote photographic safaris, not shooting safaris,” he said.