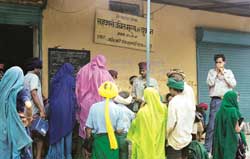 ON SEPTEMBER 12, 2006 the Madhya Pradesh High Court issued notices to the Union and state governments on the removal of 21,00,000 families from the below poverty line (bpl) list.

The Union government, state food and civil supplies department and others have to reply within four weeks.

The plaintiff's counsel contended that the Programme Evaluation Organisation (peo) of the Planning Commission of India has decided on a formula to reduce the number of persons under bpl level receiving rations under tpds and also to reduce the number of such ration card holders to 36 per cent of the population of the state. But, for states like Madhya Pradesh, the number of bpl families are more than the maximum limit of 36 per cent fixed by peo. Nevertheless, the state government followed peo in formulating such a drastic way ahead.