Earlier in October 2005, the board had issued a similar order to mbpt directing to refurbish its manual coal handling practices, which were otherwise causing air pollution and leading to serious health hazards in the vicinity. But mbpt secured a stay from the appellate authority saying it will soon adopt environmentally efficient practices.

"No progress has since been made, except that the board has received huge piles of complaints from local residents against high pollution load. This forced us to issue another notice to mbpt on December 11, 2006, directing to stop handling of coal at Haji Bunder jetty," D B Boralkar, member secretary of mpcb said. Instead, mbpt has once again found an escape route in the appellate authority. In the December 14 order the authority states "the appellant (mbpt) has made out a case for grant of stay", and will file a detailed submission on the issue within two weeks. The case will now come up for hearing on January 3, 2007.
Earlier on m b pt's insistence, the appellate authority had appointed the Water and Power Consultancy Services (India) Ltd (wapcos), a public sector enterprise under the Union ministry of water resources, to assess whether the coal handling at the port was affecting the air and suggest remedial measures.

wapcos submitted its report on December 5, 2005. But it was neither in conformity with the prevailing environmental regulations nor covered the required technical aspects. wapcos submitted an updated report on January 2 this year. But this time mpcb contested the report. 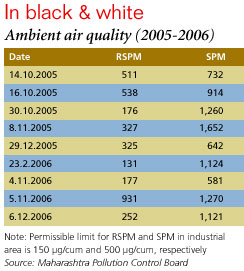 It also hired National Environmental Engineering Research Institute (neeri) to carry out the environmental impact assessment and air quality monitoring of the port and its vicinity. neeri submitted its report in May 2006.

The report, Environmental consideration of coal handling at Haji Bunder jetty, notes "The huge quantity of coal being handled in a limited area with inefficient system of unloading and loading is the cause of major concern for deterioration of ambient air quality...Unless the coal handling is improved it would not be desirable to allow the continuation of this activity at Haji Bunder."

neeri's report also suggested scientific ways of coal handling. mbpt, however, debunked the suggestion and claimed that coal handling at Haji Bunder jetty is not leading to any pollution.

Of late, it informed the appellate authority that as per wapcos report "coal handling has not caused ambient air quality beyond prescribed permissible limit"--a claim, which the authority seems to be have upheld. For instance, the authority's December 14 order notes that "the recommendation of neeri to install dlcc cranes with integrated hoppers cannot be implemented due to various reasons such as old jetty and the draft is 3.5 metres during high tide..."
Sources contend the issue is not confined to MbPT, mpcb or the appellate authority there is more to it.

Haji Bunder jetty handles more than 1.5 million tonnes of coal annually and supplies it to the Tata Power Company and the Maharashtra Power Generation Co Ltd. Tata Power has already constructed its own mechanised jetty at Chembur at a cost of Rs 163 crore. The mechanised jetty can transport coal in closed containers to Tata's Trombay thermal power plant.

But without clearance from the office of the Union minister of shipping, road transport and highways, the jetty is lying unused. For MbPT, the sole coal supplier to power companies in the area, it's a no-worry situation, as any tinkering with it can plunge Mumbai into darkness.