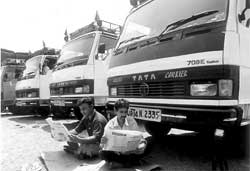 with the Mumbai High Court (hc) refusing to dilute its directive, transporters in the city went on a strike from March 17-21, 2002. On October 17, 2001, the court had ruled that all commercial vehicles more than 15 years old should either switch over to alternative fuels or be phased out by January 1, 2003. The hc reaffirmed its stance on February 27, 2002. The stipulated green fuels include cng (compressed natural gas) and lpg (liquefied petroleum gas).

The strike was withdrawn on March 21 following talks between the transporters' body and Maharashtra chief minister Vilasrao Deshmukh. The state government will now file an affidavit within two weeks on providing facilities for conversion of 15-year-old vehicles to cng or lpg mode.

Earlier, about 4.5 lakh heavy vehicles, including trucks, tempos, school buses and oil tankers, had gone off the roads in response to a strike call given by the Maharashtra Rajya Truck Tempo Tankers Bus Vahatuk Mahasangh, comprising 220 transport organisations. Their main grouse was the dearth of cng refuelling outlets. The body has urged the authorities to either scrap the new rule or make it time-bound.

The immediate impact of the agitation was felt by wholesale markets, with the prices of vegetables rising. The strike had its echo in the state assembly too. The cm gave an assurance that his government would move the Supreme Court to relax the deadline for conversion of engines. The Indian Merchants' Chambers had also urged transporters to follow the path of negotiations.

The court had also stipulated similar measures for three-wheelers that were more than 10 years old and four-wheelers which had been plying for over 15 years, setting a March 1, 2002, deadline for them. There are about 17,000 autos in Mumbai which fall in this category. Of these, only 3,000 have converted to cng or lpg. The remaining 14,000 should, therefore, have been phased out by the beginning of March.

But the taxi and auto drivers' unions seem to have got a temporary reprieve till March 31, 2002, when the matter will be heard next. The taxi drivers expressed their inability to change to cng-compliant systems, saying that the number of filling stations was inadequate and there were only 16 authorised converters. As more than 4,000 taxis with the infamous 137 d (diesel) engines still run in the metro, the union pleaded for an extension till December 2002.

The Bombay Autorickshaw Union is also said to be planning to toe the same line by filing an application in the court and following it up with an agitation.