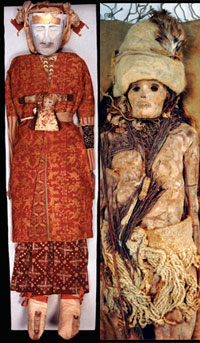 On February 2, University of Pennsylvania’s Museum of Archaeology and Anthropology called off a much-advertised exhibition at the eleventh hour.

“Secrets of the Silk Road” was advertised as “an extraordinary collection of mummies excavated at desert burial sites in the far western reaches of China”.

Pam Kosty, the museum’s spokesperson said the exhibition was called off at China’s request—she did not elaborate. But the Los Angeles Times sees political motives. According to the newspaper, “The mummies were excavated from Xinjiang where there is tension between the indigenous Uighurs and Han Chinese settlers.

The mummies have Caucasian featureslike the Uighursand the Uighurs see them as evidence of an ancient claim to the land.”