A new class of mutations, involving duplications instead of deletion or 'misspelling'and displaying queer patterns of transmission, might be behind a host of genetic and neurological disorders that afflict humankind 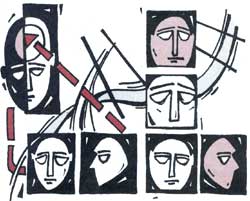 THE entire DNA (deoxyribonucleic acid) content in a cell can be compared to a book containing instructions for making the plant or animal of which that cell is a part. The four bases that make up the DNA code - A, T, G and c - are like the letters in the book. Within a given individual, the book is present in many identical 'copies'; two occur in each cell.

The copies in a cell are actually versions that are not exactly the same. The process of copying occurs at different levels. Firstly, there is the analogue of a Xerox, or better still, an old-fashioned typeset copy. This act of copying takes place each time a cell divides into two, as happens anywhere from 30 to 50 times during the p rogression from a newly fertilised egg to an adult.

More importantly, there is another form of copying which accompanies the process of sexual reproduction. This involves what might be called copying with shuffling. Exactly one copy of what the child gets comes from the father, and the other copy from. the mother. Each of these copies consists of a single book of instructions created by shuffling the pages in the two books present in either parent.

As with any copying process, mistakes, known as mutations, can occur. The probability that a mutation occurs is on the whole a random event, meaning that it is the same from one individual to another and from one generation to another. A mutation is a single-step affair. If a mutation has any effect at all, it is because an instruction is missing, or is misleading. In terms of our analogy of a book, an error in copying could cause Go to point five to become Go to joint five, or Go to xoint five, both the distortions here would be classed as mutations.

Mutations have been implicated in human diseases, which are therefore known as genetic diseases. Over the last five years, an entirely new class of mutations, also with a role in human diseases, has been discovered. A recent article by G R Sutherland and R I Richards of the Women's and Children's Hospital in Adelaide, Australia, brings us up-to- date on the progress in the field (Proceedings of the us National Academy of Sciences, Vol 92, 1995).

These new kinds of mutations do not involve deletions or misspellings within a putative message, but consist of duplications instead. Also, they exhibit unusual patterns of transmission. The most striking feature is that within a family at risk, the chances of a member being affected seem to increase from one generation to the next. In other words, there is an element of anticipation exhibited by the phenomenon.

The genetics of transmission is curious too: 'men appear to pass on an, increased risk through their daughters, but not through their sons. For these reasons, the concerned mutations have been called 'dynamic' mutations. The best studied case of a dynamic mutation leading to genetic disease is that of the fragile-x syndrome. This is the most common cause of familial mental retardation in Caucasians and is associated with an amplification of the triplet sequence ccc (c and G are two of the four bases present in a DNA helix) lying in the neighbourhood of a gene known as FMR1 on the human x-chromosome. Normal individuals contain anywhere from six to about 50 copies Of CCG repeated in tandem - meaning one after the other.

Typically, there are one or two imperfections within the repeat. After the CCG copy number exceeds 50, it tends to increase steadily from generation to generation until a critical figure of about 230 is reached. Until this point, there is no visible effect of the increase in copy number. Once the number reaches 230, it can increase to above 230 in a single generation. At that stage, it is said to become a full mutation, and the consequence of this is that the instructions encoded in the FMR1 gene are no longer expressed. The affected individual - most likely to be a male, since females can have a second, normal x-chromosome - tends to be mentally retarded. Also, the chromosome itself is likely to be 'fragile': it can break at the region of the amplified repeats.

However, it is unknown how the absence of the message in the FMR1 gene leads to the syndrome. An understand- ing of the genetics of the fragile-x syndrome has begun to emerge. The pat- tern of transition from pre-mutation to full mutation (more than 230 repeats) is such that mothers with a pre-matation carry a risk of having affected sons, but fathers with a pfe-mutation do not tend to have affected daughters (the fathers cannot have affected sons; the male x-chromosome comes from th e mother, not ftom the father). The reason for this appears to be that the process of meiosis - the shuffling and consequent reduction of genetic material that is a prerequisite for reproduction - is very different in the two sexes.

Besides the fragile-x syndrome, a host of human neurological disorders have turned out to be due to dynamic mutations of a different trinucleotide repeat, the AGC. in some cases the repeats are in the neighbourhood of the affected gene (as in fragile-x), but in other cases they are found within the coding region of the gene. AS AGC codes for the amino acid glutamine, when there are AGc repeats in the DNA, the decoded message includes a long stretch of repeats of glutamine.

Theories have been proposed to explain why poly-glutamine stretches might cause the cellular machinery to malfunction. One genetic disease, hereditary nonpolyposis colon cancer (HNPCC), is caused by a dinucleotide repeat (iG). In all these cases ', changes in the repeat copy number are believed to be on account of 'slippages' during the process of gene shuffling. Genes that are similar insequence to HNpcc have been found in yeast and bacteria, and they encode enzymes whose responsibility is to repair copying errors that could lead to mismatches between the parental and copied strands.

This is extremely interesting. The effect of damaging genes which are responsible for correcting copying errors will be a general increase in the mutation rate. But how an increase in mutation rates might bring about the disease is yet to be explained. Nevertheless, it is clear that we are in the midst of a phase of anticipation our- selves - an anticipation that a deeper understanding of this unusualclass of genetic diseases might lead to methods for clinical intervention.