My lawyer's a killer 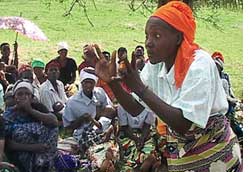 In 1994, thousands of people from the Tutsi community were slaughtered by their Hutu neighbours across Rwanda. Nine years later the killers came home from prison to live side by side again with their victims. The complexities of this homecoming are explored in director Anne Aghion's film My Neighbour, My Killer. The film premiered at the Human Rights Watch International Film Festival in the last week of June.

In 2003, the Rwandan government set up courts based on the traditional dispute resolution mechanism, gacaca, meaning "justice on the grass" in Rwanda's national language Kinyarwanda. In the process, as a Rwandan prosecutor explains in the film, "Your lawyer will be your neighbour, your prosecutor will be your neighbour, your judge will be your neighbour." Aghion followed this process. "The camera allowed them to say things they wouldn't have said to each other." There is a scene in which some widows talk to a man who had terrorized their community in the genocide. They sip beer and slowly speak about the horrible events that haunt them.