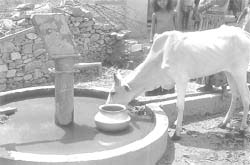 more than a hundred cows have died in a span of four months in Rajasthan's Sar region, 23 km from Jodhpur. Though authorities have refused to give any reason for the deaths, it is said that the cows died after drinking contaminated water. According to the collector of Jodhpur, V Srinivas, the post mortem examination reports have not revealed any specific disease. "The deaths could have occurred due to nitrate poisoning or heat stroke," said Srinivas. The temperature was 46 C on the day when the maximum number of cattle perished. Sheer helplessness perhaps prompted the villagers to let their cattle drink from the village well even when it was known that the water was not fit for drinking, said Srinivas.

However, Srinivas was confident that with special efforts made to ensure proper supply of fodder and water through tankers, the cattle would be safe in the area.