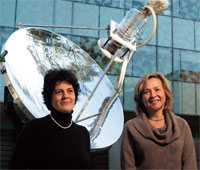 INFECTIONS caught in hospitals are a leading cause of death in developing countries. In most cases, poorly or un-sterilised medical equipment is the culprit. Hospitals generally use steam-based autoclaves to sterilise medical equipment but a consistent power supply is required to run these devices. Therefore, most people in small towns and villages that have limited access to electricity have no option but to undergo surgery with poorly-sterilised equipment. This makes millions of patients contract bacterial, viral and fungal infections and leads to a high number of fatalities every year.

A team of researchers, led by Naomi Halas of Rice University in Texas, US, has now developed a new technology that uses nanoparticles to convert solar energy directly into steam. The researchers have used this technology to develop a solar autoclave for sanitising medical instruments and processing waste. The simple device could prove to be a boon for millions of patients in under-developed and developing countries.

The solar autoclave, described in ACS Nano on May 31, consists of a mirrored parabolic dish that directs the sunlight onto a lens. This lens concentrates the solar heat onto a solution of water and gold nanoparticles. The nanoparticles absorb sunlight much faster than the surrounding water. This generates a huge temperature difference and instantly converts water into steam. The process is extremely efficient—only 20 per cent of incident solar energy is used up in heating the solution whereas 80 per cent is utilised in producing steam.

The researchers have made two prototypes based on this technology. One is designed for sterilising medical equipment and the other for disinfecting human and animal waste to help reduce spread of diseases. Both the prototypes can maintain a temperature between 115°C-132°C for a time period sufficient for sterilising the contents of a 14.2 litre autoclave. The devices were tested by evaluating their efficiency in killing extremely heat-resistant bacteria, Geobacillus stearothermophilus, that is more difficult to kill than most other microbes. Both of the solar autoclaves passed this test, killing all the bacteria in 30 minutes. They also fulfil the United States’ Food and Drug Administration sterilisation specifications.

“For medical applications, the biggest concern about the autoclave is consistency. You have to be sure it is operating properly every time. It is important to carry out bacterial kill tests and you have to consider if there is enough sunlight all year to make this usable,” says Ruth Stringer, the international science and policy coordinator of US-based non-profit Health Care Without Harm. “If it is possible to also use other fuel, such as gas, for the medical autoclave then the solar version can help reduce the amount of fuel needed for sterilising the medical instruments. When fuel is expensive and hard to obtain, this can be a real benefit.”

The device has several advantages: the nanoparticles can be re-used indefinitely, water is the only substance which is consumable but it does not need to be sterilised before use. Its low cost means the device can be used in the remotest of areas with no access to electricity. Low cost, environment-friendly steam generation is not a distant reality anymore.