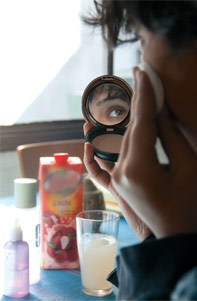 FROM sunscreens, antiseptics to medicines that fight HIV, artificially engineered nanoparticles are vital for numerous consumer and industrial products. Of a nanometre’s size, these particles are of silver, gold, titanium dioxide and other elements and compounds. While nanotechnology has become the latest buzzword in science, a group of scientists has expressed concern that nanoparticles could be entering the food chain.

Nanoparticles are released into the environment through the products they are used in. For instance, when someone washes face after having applied sunscreen, the cream gets washed down and so do the nanoparticles infused in such creams. These nanoparticles are taken up by species at lower levels of the food chain. From there, the pollutants move into organisms that feed on those species, according to a team of scientists led by Patricia Holden of Donald Bren School of Environmental Science and Management, University of California, Santa Barbara, in the US.

While exploring nanoparticle absorption in a microbial food chain, the researchers observed that nanoparticles of cadmium and selenium were entering bacteria Pseudomonas aeruginosa and accumulating in them. When the bacteria fell prey to a higher organism, protozoa called Tetrahymena thermophila, nanoparticles moved too.

Since each protozoan predator feeds on thousands of bacteria, the amount of nanoparticles was higher in Tetrahymena thermophila. When quantified, the concentration was approximately five times higher in the predator than the prey. “This result, called biomagnification, implies that the next organisms in the food chain would have more nanoparticles,” said Holden. Commenting on the study, published in the January issue of Nature Nanotechnology, Nicholas S Fisher, professor at School of Marine and Atmospheric Sciences, State University of New York in the US, said, “This study is striking since it shows evidence of biomagnification in a simple, short food chain.”

Research done by other scientific groups have shown that metals like aluminium and even gold can be biomagnified across food chains as nanoparticles. For instance, in a study conducted by the University of Kentucky in the US lead researcher Paul M Bertsch and colleagues exposed tobacco plants to gold nanoparticles and then allowed herbivorous tobacco hornworms to feed on them. The predators accumulated the nanoparticles at concentrations six times higher than those measured in the plants, according to the study published in the December 2010 issue of Environmental Science and Technology Studies Research.

These experiments show that humans, the topmost consumers in the food chain, are likely to face a high degree of biomagnification implying a metal overload and subsequent toxicity. “As far as industrial products are concerned, it is important to control the random release of nanomaterials from manufacturing sites into the surrounding environment, and minimise manufacturing worker’s exposure,” said Holden. She added, “The scientific should also decide on what design criteria would make engineered nanomaterials environmentally compatible. At present, nanoparticles are designed keeping in mind their functionality.”

David Buchwalter, assistant professor and coordinator of environmental toxicology concentration, department of environmental and molecular toxicology, North Carolina State University in the US, is not convinced with the paper’s conclusion. He said, “one cannot call things biomagnification just because one level of the food chain has higher concentrations than another.” Most people agree that at least two successive steps in the chain with increasing concentration of biomagnification are needed, he added.