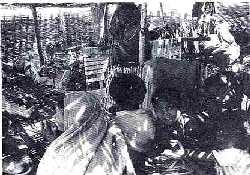 The ambitious Sardar Sarovar Project (SSP) was dealt yet another blow by a study conducted by the Tata Institute of Social Sciences (TISS), which examined the project's rehabilitation aspects. The implementation of the Narmada Water Disputes Tribunal Award, which had listed comprehensive project guidelines, was "far from satisfactory", noted the report of the study, sponsored by the Maharashtra government.

The report, published in December, also raised doubts about the state government's ability to "take on the full dimensions of the task." The TISS study noted SSP had deprived a group of citizens who had "lived beyond development strategies" for centuries. This is the argument advanced by anti-dam Narmada Bachao Andolan (NBA) activists. "Bringing people into the mainstream should not affect their situation," the report stressed.

TISS has been conducting studies in the project-affected areas since the mid-1980s. "They know the ground reality and their credibility is unquestionable," said NBA spokesperson Himanshu Takkar. According to the study report, the government failed to gauge the possible environmental and social impact of the project, determine the number of project-affected people and the resources needed for resettling the oustees.