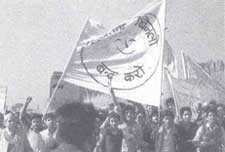 When the turbine generator unit of the Narora atomic power plant caught fire on March 31, the department of atomic energy was quick to boast about the efficient working of the plant's indigenously-developed safety systems. The 220-mw plant in Uttar Pradesh is equipped with two safety systems; one shuts down operations and the other cools the nuclear reaction. Both safety systems a.re triplicated to ensure that even if one is out of order, the other two are available.

But a post-mortem by the Atomic Energy Regulatory Board shows despite all the well-described procedures, it took two hours to control the fire and three more to put it out. The board brands the delay a "severe safety lapse." The turbine hall fire, which was probably caused by an electrical spark, spread to the main building area. The board says only then did the circuit breaker trip and isolate the generator circuit. Even smoke sensors in the generator area did not detect. the fire immediately. Taking the delay in putting out the blaze, the board classified the disaster at Level Three on the International Nuclear Event Scale.

The loss from I the fire has been estimated at Rs 150 crore.