National status will fetch it funds 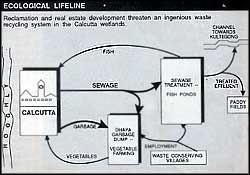 RESPONDING to a West Bengal proposal to seek massive external aid to conserve the Calcutta Wetlands, the Union ministry of environment and forests (MEF) has recommended they be designated a waterbody of national importance. Such a recommendation would not only protect the wetlands from rapacious real estate developers, but also make them eligible for Central funding.

With its eyes set on major funding, either bilateral or from the global environment facility (GEF), the West Bengal government has submitted a wetlands conservation proposal to the MEF with a price-tag of a staggering Rs 132 crore. The amount is staggering because the MEF's annual budget for the country's 16 wetlands of national importance is only Rs 1.5 crore. An MEF official noted non-committally, "The proposal is now being processed by the department of economic affairs. The proposal will be sent to different funding agencies, but as this will take long, Central funding will keep the work going meanwhile."

Only last year, the Calcutta High Court ruled in a public interest case filed by PUBLIC, a Calcutta-based non-governmental organisation, against real estate development of the wetlands located mainly to the east of the city. The state government refrained from appealing the ruling and came up with a massive conservation plan instead.

With the state government and the MEF in agreement, the way is clear to set up a wetland conservation authority under the department of urban development as the nodal agency, says an official at the Calcutta Metropolitan Development Authority (CMDA), which is preparing the project proposal on conserving the wetlands. The CMDA apprehends major engineering problems resulting from the unique functions of the wetlands of treating sewage from Calcutta and providing a livelihood to rural communities through agriculture and fishing. CMDA officials warn these problems could affect the ongoing Ganga Action Plan because the sewage disposal and storm water systems devised by the British performed the vital function of protecting the Ganga.

Already a number of municipalities in the Calcutta region have replaced conventional sewage treatment plants with a wetland pond system, as a part of the resource recovery programme under the Ganga Action Plan.

The CMDA reports sewage from Calcutta flows for about 28 km through an outfall channel that is linked with number of fishery feeding channels. With a pisciculture boom in the area, a number of private channels now carry sewage to various fish ponds, but the distribution channels and the ponds need to be desilted. Construction of another outfall system also is necessary because the main channel built in the 1940s is in disrepair. Finally, the report warns that there is a need to assess the problem of health risk from sewage-feeding fish and from vegetables grown on garbage dumps.

Observers note that in the past century, the wetlands have come full cycle -- from wasteful and damaging development practices to conservation-oriented programmes. The credit goes entirely to public awareness.