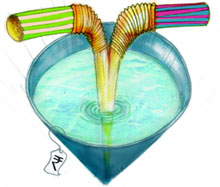 The Union Ministry of Water Resources recently uploaded the draft of the new national water policy on its website, inviting comments and objections from the public. Water resources minister Pawan Kumar Bansal said the policy, under preparation since 2010, is being framed with a “participatory approach”.

The draft of the National Water Policy, 2012, uploaded on January 31, has called for a water framework law that will enable the establishment of river basin authorities with appropriate powers to plan, manage and regulate water resources at the river basin level.

Community resource or economic good?
The last water policy was framed a decade back and says it “may be revised periodically as and when need arises”. The preamble of the new policy draft gives reasons for the revision. It notes that availability of utilisable water is coming under further strain, with expectations that conflicts would only increase in future. The policy seeks to address such a future, with a growing population and rising needs of a developing nation with the looming uncertainty of climate change.

“The objective of the National Water Policy is to take cognisance of the existing situation and to propose a framework for creation of an overarching system of laws and institutions and for a plan of action with a unified national perspective,” says the draft preamble.

The draft explicitly says that water needs to be managed as a community resource held by the state under public trust doctrine, but at the same time it underlines the need to treat water as an “economic good”. What's more, the new policy deliberately misses a crucial point—prioritising competing users of water, thus providing flexibility for allocating water for industrial use even at the cost of agriculture. The approach, says the ministry, is to steer clear of water allocation priorities because they lead to conflict.

G Mohan Kumar, additional secretary in the water resources ministry says a reading of the draft shows it is implicit that irrigation be given priority over industry. The draft states, “After meeting the minimum quantity of water required for survival of human beings and ecosystem, water must be used as an economic good with higher priority towards basic livelihood support to the poor and ensuring food security.” When asked why this is not stated explicitly, he replied: “We don’t want to keep it rigid.”

Can the National Water Policy do away with priorities?

Subhash Chander, former IIT-Delhi professor and member of the 2012 National Water Policy Drafting Committee explains the approach. “Priority is different at different places. Each catchment and watershed requires a different solution. There was total agreement amongst the drafting committee to do away with the priority of allocations,” he says. “This is a consensus document,” he adds.

But the new draft is at variance with the earlier water policy adopted a decade ago which states that drinking be accorded the highest priority followed by irrigation, hydro-power, ecology, industrial requirement, and navigation and other uses. Kumar says the priorities have been done away with since they were “creating confusion”. Agriculture may become irrelevant where industrialisation is taking place on a large scale,” he adds. However there is no answer on what the confusion is.

Silver lining
On a positive note, the draft upholds the ecological needs of a river for the first time, stating that water be set aside in proportion to a river's natural flow regime. “A portion of river flows should be kept aside to meet ecological needs ensuring that the low and high flow releases are proportional to the natural flow regime, including base flow contribution in the low flow season through regulated groundwater use,” reads the draft.

“The new policy includes some welcome change in priorities for water to be treated as a community resource under state ownership, and gives priority for base river flows and water as a social good for basic drinking water and sanitation needs,” says Depinder Kapur, coordinator India WASH forum, a non-profit. But the priority for agriculture needs and the increasing conflict of industry-agriculture and urban-agriculture water needs is not stressed in the draft, he adds.

Industry gives thumbs up
Industry associations, who lobbied for the draft, have welcomed it. “Improving water efficiency across all sectors is crucial for reducing dependence on freshwater sources,” says Romit Sen, senior assistant director, Federation of Indian Chambers of Commerce and Industry (FICCI). Water should be priced properly to reduce its overuse. Pricing of water for various uses has received considerable attention in the draft policy, he adds. The draft maintains that water for drinking should have priority over other uses.

The first National Water Policy of 1987 explicitly stated water allocation priorities, but issued a rejoinder: “However these priorities might be modified if necessary in particular regions with reference to area specific considerations.”  The 2002 policy deviated from the National Water Policy of 1987, by removing this rejoinder, and juggled and added priorities to include ecology, navigation and divided industry into agriculture-related (agro) and otherwise. The 2002 policy also encouraged private sector participation in planning, development and management of water resources (see table). Due to opposition to the possibility of the private sector owning water assets, this has been dropped in the draft. Instead, impetus has been given to the public private partnership (PPP) model. The draft mentions the “service provider” role of the state has to be gradually reduced and shifted to regulation and control of services. The draft also states that water-related services should be transferred to community and/or private sector with appropriate PPP model under the general superintendence of the state.

Ramaswamy Iyer, principal draftsman of the 1987 policy is critical of the draft policy for simultaneously advocating community participation, public trust doctrine and PPP. “The draft fails to recognise that we cannot simply assert a number of propositions without considering their inter-relationships (and possible contradictions),” he says.

“The draft is a slight improvement on the 2002 policy, but it is no more than slight,” says Iyer. “There is really no fundamental departure from the conventional approach of supply-side response to projected demand, and the advocacy of large storages as the answer to all problems,” says Iyer. He has submitted an alternative water policy to the drafting committee. In his draft, Iyer has argued: “Humanity receives water from, and cannot presume to allocate water to nature and ecology. It follows that nature and ecology come first, are anterior to human water use, determine the water available for allocation, and cannot figure within our system of priorities for water allocation”. This has been dismissed by officials in the Central Water Commission as “a very noble sentiment” and just another “high sounding line”.

The issue is not about the objectives of the policy, but of instruments to translate the policies (intentions) into actions on ground, says Dinesh Kumar, executive director of Institute for Resource Analysis and Policy in Hyderabad. These include creation of river basin organisations, regulatory bodies and establishment of a legal framework to realise the objectives. The draft does not seem to offer anything significantly different from what the old one suggested, only the wordings are different, says Kumar, seeking to move beyond semantics.

The ministry says the 2012 policy will set new guidelines for states to adopt. “It is left to the states to use these guidelines,” say ministry officials. The earlier policy also stated that success of the endeavour will depend on a commitment to achieve the objectives and adoption of state water policies backed by an operational action plan. In the past decade only 11 states drafted their own policy.

The draft National Water Policy, 2012 shall remain open for comments till February 29.