Early warning a must to cope with floods

People along the Brahmaputra were prepared last week, while in the weeks before that, people in Kerala, Nagaland and Assam were not 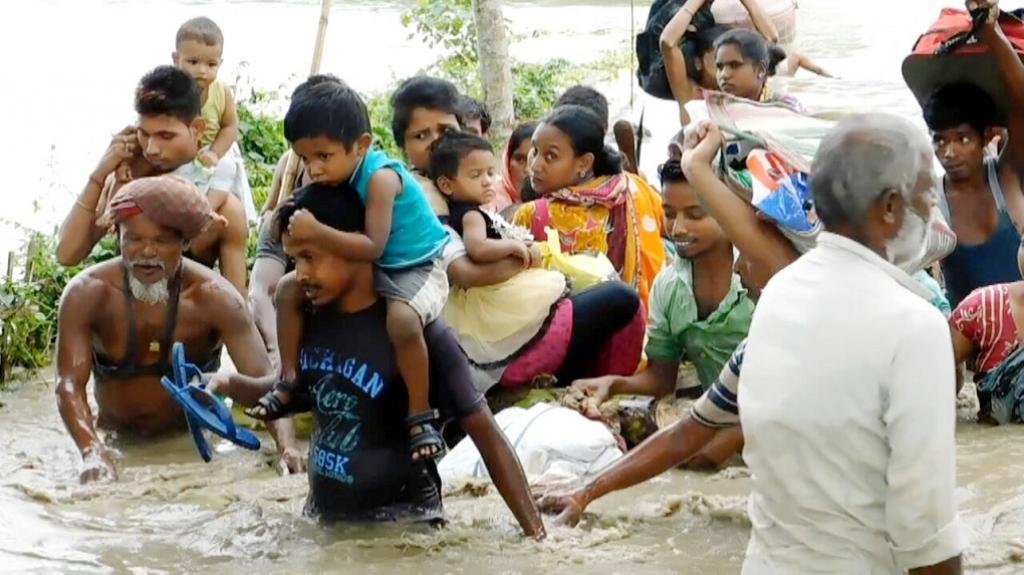 On July 30, the Dhansiri river was calm and the heat in central Assam scorching. Rain would bring welcome relief, but the meteorologists were warning of a deficit monsoon. In an age-old ritual, people were organising weddings of frogs to invoke the presence of the rain gods.

On August 2, the Dhansiri broke its flood level record at Numaligarh refinery in Golaghat district. The earlier record – set on September 24, 1985 – had been 79.87 metres. This time it was 80.18 metres, and stayed above the previous high level for over 60 hours.

It caught almost a million people off guard, especially because it had not really rained much in Assam during those three days.

The flood in both rivers was caused by the North Eastern Electric Power Corporation Limited (NEEPCO) opening all five gates of the 394-metre-tall dam of its 75 MW Doyang Hydroelectric Power Project following heavy rain in the Nagaland hills.

The flooding killed five people and caused damage in Nagaland that has been estimated at Rs 800 crore (USD 113 million) by the state government.

In Assam, the flood inundated 36 villages. “This misfortune was brought upon us by the NEEPCO project in Nagaland. We were not warned previously that the dam gates would be opened. As a consequence, almost all the households in our village lost most of their belongings. This disaster turned us to paupers within a few hours,” Atul Gogoi, village headman of Kenduguri in Golaghat district, told thethirdpole.net. Deepak Gogoi, a local youth sheltering in a makeshift camp complained about lack of rescue boats. “Thank God, there was no rain. Or it would have been tougher to rescue everybody.”

“Water continued to gush in since 2 a.m. We later heard that many of the upstream villages were washed away by the deluge, yet there were no arrangements to by the district administration, no early warning. This is the first time in my life I witnessed a disaster of such magnitude,” said Rubul Ali, a resident of Numaligarh.

By August 6, the Assam State Disaster Management Authority put the number of affected persons at 87,300 and 7,086 hectares of land in Golaghat district were under water. 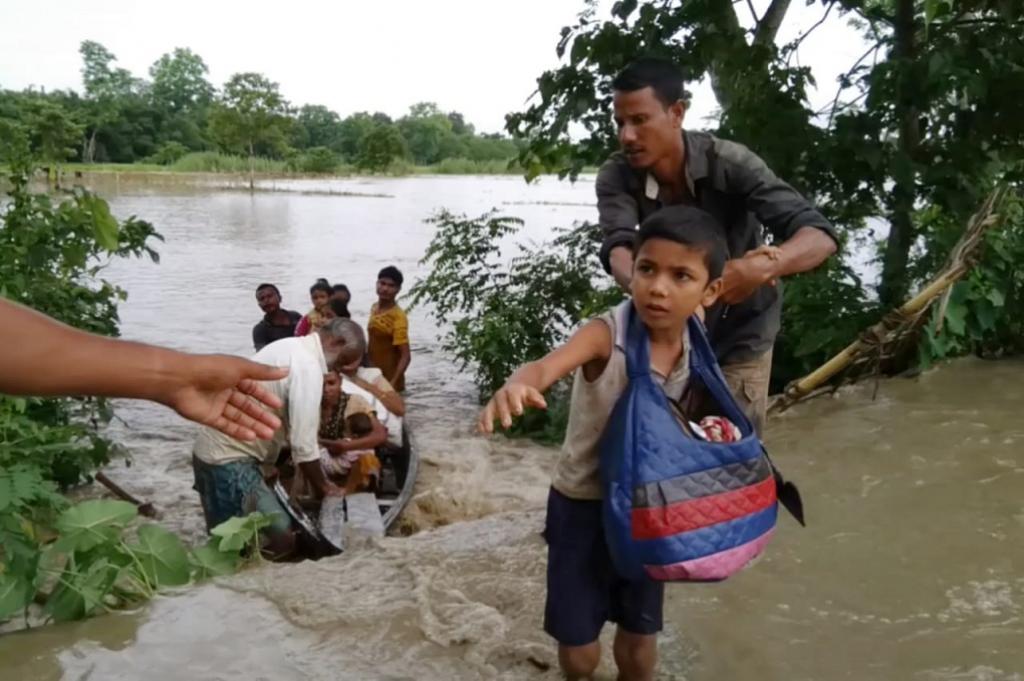 NEEPCO is owned by India’s central government. Bharat Chandra Deka, its executive director, Operations and Maintenance, said that warnings had been issued. According to him, there had been a landslide on the Sidzu River, a tributary of the Doyang, in Nagaland’s Zunheboto district, and that had blocked up the water, which later broke through and came roaring down. He said all deputy commissioners of Nagaland’s districts were issued a letter by the Nagaland Disaster Management Authority about the landslide. According to Deka, the local administration in Golaghat and Wokha districts were also notified.

Officials in the Nagaland Soil and Water Conservation Department said that the 2,600 square kilometre catchment area of the Doyang Hydroelectric Project, which is about 60 kilometres upstream of Golaghat town, received 348% excess rainfall excess from January to July, with most of the rain towards the end of July.

NEEPCO senior manager L.A. Kharmawphlang said water inflow to Doyang reservoir was more than 600 cubic metres per second (cumec) since July 27, and rose to more than 1,150 cumec on July 31, forcing the authorities to open the floodgates.

The utility of issuing an early warning of a possible flood was shown in the area in the last week of August, when the Siyang (which leads to the Brahmaputra) swelled ominously due to release of a large volume of water in upstream Tibet, but there were no casualties. 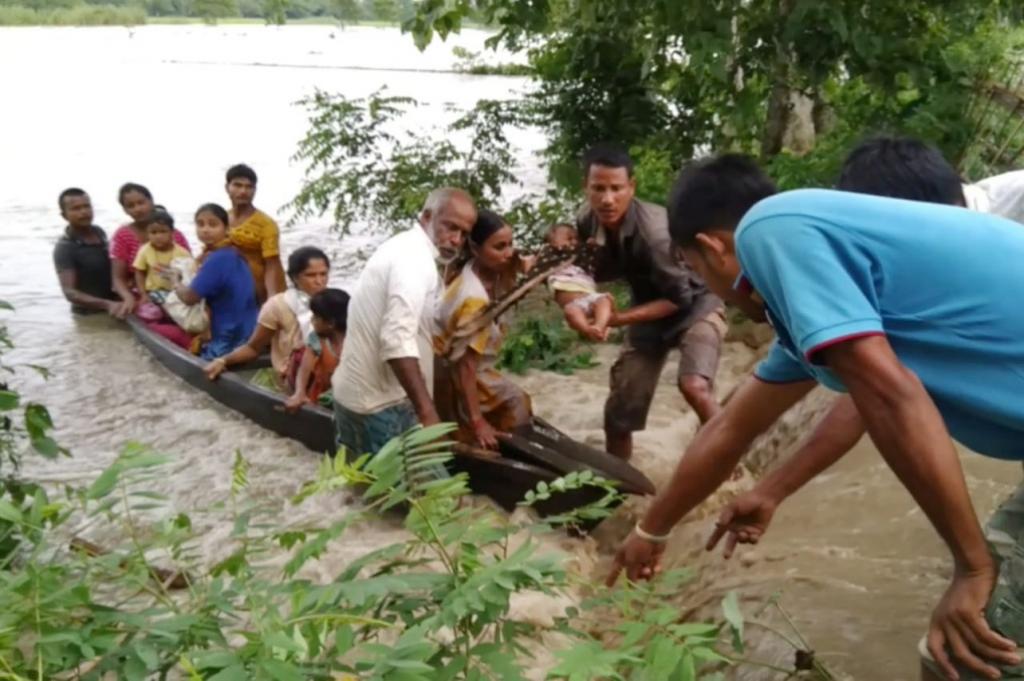 Flood victims downstream are not convinced, accuse NEEPCO of trying to store more water than was safe, because it wanted to maximise electricity generation. Akhil Gogoi, leader of the anti-dam movement Krishak Mukti Sangram Samity, said that in July the Doyang project had produced 45.52 million units of electricity, over three times the target of producing 14.28 million units, a target set by the Central Electricity Regulatory Authority. He demanded that NEEPCO compensate the flood victims.

Given the habitually heavy monsoon heavy rainfall in northeast India, all dam managements are supposed to keep reservoir levels low in July to minimise flood risk.

Such flash floods have occurred in the area before. in August 2015, residents of ten villages –Mengshanpen, Tsopo, Chudi, Longtsung, Sheruechuk, Morakjo, Lotsu, Pyangsa, Moilan and Pyotchu – had given a representation to the head of NEEPCO under the banner of the Downstream Affected People’s Organization (DAPO), alleging death of at least five persons between 2003 and 2014 due to the sudden “release of huge volumes of water” and loss of livelihood for a very large number of people. They also said such sudden releases affected movement of people across the river and destroyed their access to the river, fisheries, water sources, hanging bridges, sand and boulder sources and river bed cultivation.

Mrinal Saikia, Member of Assam Legislative Assembly from Khumtai – a constituency severely hit by the flood – filed a complaint at the Golaghat Police Station, alleging that 116 villages in the district were under water due to the negligence of NEEPCO. The Head of the Doyang project, Priyabrata Das, was interrogated by the police in this connection. Arun Sarma, former MP from Lakhimpur, also held NEEPCO responsible for the disaster. He called it a gross violation of human rights and said the company should face punitive action.

Assam’s Chief Minister Sarbananda Sonowal had blamed NEEPCO for the Ranganadi disaster last year.  The 405 MW Ranganadi hydroelectricity project in Arunachal Pradesh has displaced thousands in Dhemaji and North Lakhimpur districts of Assam, reportedly because the dam managers have released water without warning more than once.

In the past, India’s planners have estimated the hydroelectricity generation potential in the northeast of the country at 58,971 MW, almost 40% of the country’s total hydro potential. By February 2016, when the figures were last compiled, the region was generating 1,242 MW, about 2.1% of the stated potential. Many projects have been stalled due to unsatisfactory environmental impact assessments, especially in downstream areas. Others have been stalled by local protests. Seismologists have also repeatedly questioned the wisdom of building large dams in an earthquake-prone region.