Why the recent surge in earthquakes?

The recent surge in earthquakes and the explanation for the formation of the world's largest exposed fault have provided momentum to seismological research. Shreeshan Venkatesh looks at the latest findings 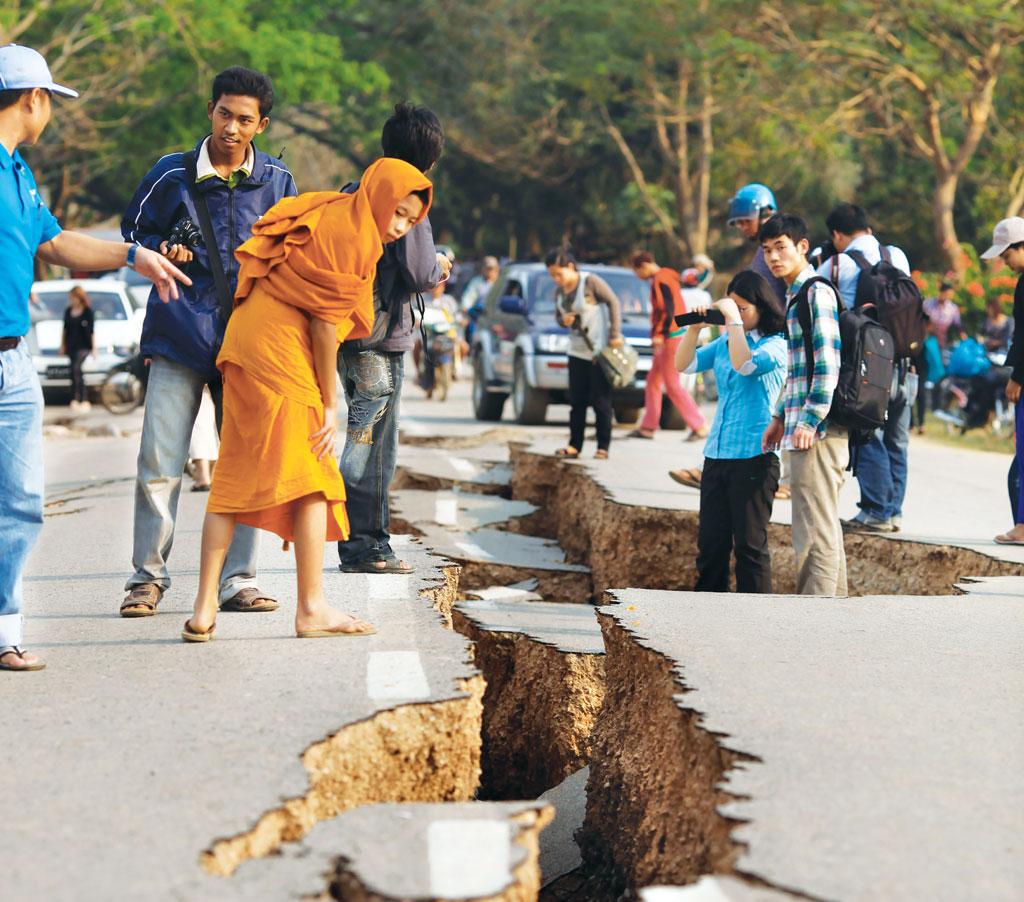 The last two months of 2016 proved to be a busy period for seismologists. In November, scientists found out that the abyss under the Pacific Ocean between Indonesia and Papua New Guinea was left behind by a massive earthquake during the last Ice Age and is actually the world’s largest exposed fault. The Banda Detachment Fault is seven kilometres deep, 450 km long and if the bare ocean floor were seen from above, the fault would cover an area of 60,000 sq km. Scientists say that sometime between 10,000 to 30,000 years ago, as the Australian and Pacific tectonic plates grinded against each other, a piece of continental crust the size of Belgium was ripped apart, leaving a huge tear or fault in the surface.

We have known of the existence of the Banda abyss for many years now. But it was not until late last year that scientists were finally able to conclude what formed the Banda abyss, indicating how little we know of the ground beneath our feet.

Since mid-October, a surge in seismic activity, with around 15 temblors measuring more than 6.5 on the Richter scale, has also aroused interest. At least 400 earthquakes of magnitude 5 and above were recorded in December alone, marking an increase of three and a half times the monthly average (see ‘In continuous motion’,). The bulk of all quakes occurred along the plate boundaries, especially along the Pacific Ring of Fire. While the surge is within the normal range, it provides seismologists with more seismic observations to chew over and confirms that the Earth’s crust is active and moving.

“There are many things about the inner workings of the Earth and earthquakes themselves that we do not yet understand,” says Vineet Gahalaut, director of the National Centre for Seismology (see ‘A promising start’,). It is still an actively developing field with several unknown variables under research.

Only over a century ago, German scientist Alfred Wegener first suggested that the Earth’s surface was not static as was believed at the time. Wegener arrived at his theory when he found similar fossils in different parts of the world, indicating that continents may not have been as far away from each other as they are today. The theory has since been modified, but the broad idea remains that the Earth’s surface is made of at least 15 continental plates which are constantly colliding with, or pulling away from one other. For example, the Australian plate was recently found to have moved northward by over 1.5 metres in the last 20 years, putting the country’s GPS coordinates out of sync.

When the plates move in relation to others, stress continues to build along the faults, much like in a wound-up spring. When the built-up strain breaches a threshold, the fault slips or ruptures and causes an earthquake. While some of the strain is released during the jerk, the movement of the plates causes other regions along the fault to get loaded with stress and results in a chain of seismic events that can unfold over millions of years. 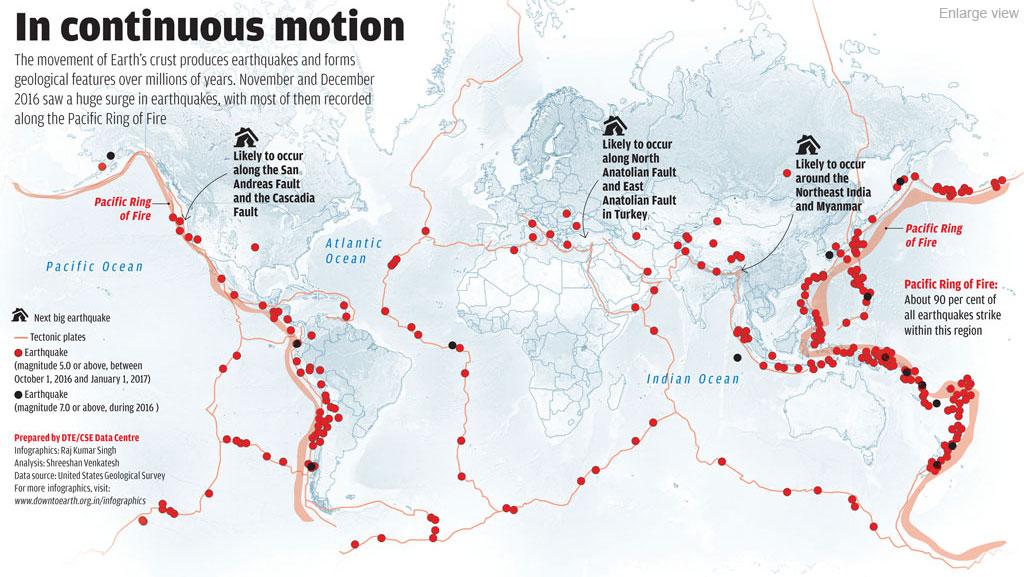 But new research is challenging long-held beliefs and pointing at other processes that may be leading to earthquakes. For instance, a study published in Science in November 2016, says the curvature in a fault is a prominent factor responsible for the location, timing and magnitude of an earthquake. It states that the rupture threshold or stress-bearing capacity of surfaces is varied along curved faults. Hence, the stress released by one rupture is passed on to neighbouring surfaces and the impact of the temblor is restricted. On the other hand, the stress-bearing capacity is more homogeneous along flatter faults, giving rise to a higher likelihood of large simultaneous ruptures. Another factor that dictates when a fault ruptures is what the fault is made of. For example, basalt is harder than shale and can take greater strains.

For more than two decades, there has been increasing evidence of “slow earthquakes” or seismic rumblings under the Earth’s surface. These quakes are immeasurable on the Richter scale and go on for months or even years before manifesting in a large event on the surface. In October 2016, a paper published in Nature Geosciences said that slow slip events took place for at least two months before a magnitude 7.3 earthquake struck the Mexican town of Papanoa in April 2014. The researchers estimate that the 2011 Japanese earthquake of magnitude 9 was also a result of slow slip events.

Processes leading to earthquakes are not limited to the surface. Recent research shows that the very process of formation of continental plates may be closely linked with them. When our planet began to form about 4.5 billion years ago, the superheated molten layers separated from the innermost metal core and cooled through the convective process like a fluid. The molten layers thus rose to the surface, cooled down and sank, only to be replaced by hotter layers. Today, we know that the Earth’s crust—the outermost layer—is about 100 km deep. Below it lies the mantle, a 2,900-km-thick layer of mostly-solid material. The part of the upper mantle that borders the crust is further composed of two distinct layers: the solid lithosphere (the coolest and most rigid layer) and the semi-molten asthenosphere (which is denser and weaker). It is the “floating” of lithospheric plates on the asthenosphere that affects tectonic plate movements, causing earthquakes (see ‘Inside Earth’).

In 2010, researchers from Monash University, Canada, appeared to have contradicted this theory when they suggested that plate tectonics was more of a “top-down” system than a “bottom-up” one. They stated that the rising and sinking of the Earth’s crust, and not what is below it, determines the motion of plates. Yet another study by a team from the University of Columbia, USA, published in Nature in July 2016, indicates that the system is not so simplistic. They found that tectonic plate movement is not restricted to activity in the lithosphere and may be influenced by small-scale convection in the lower, semi-molten layer of the asthenosphere.

Some answers may also be found in the Earth’s active geological history. A study by researchers from the University of Toronto, Canada, and the University of Aberdeen, UK, published in Nature Communications in June 2016, shows that former plate boundaries left by ancient geological events in the Earth’s mantle may still be influencing plate movement. They could be leading to the folding, breaking and flowing of the crust within a plate instead of along the fault line between plates which is prone to earthquakes. This could lead to seismic activity and the formation of geological features such as mountains over millions of years.

Scientists have unearthed other factors that they do not fully understand yet. For instance, earthquakes that occur deep below the Earth’s surface are considered “safer” than shallow quakes as they have not shown disastrous consequences for human life and property yet. But a paper in the Journal of Geophysical Research-Solid Earth in December 2016 shows that deep earthquakes release much larger quantities of energy than shallow events and, hence, have more potential for “disturbance”.

How these deep quakes are connected with the surrounding seismic activity requires more research.

In the past decade, researchers have started investigating the impact of atmospheric changes on the Earth’s geological processes. In a 2009 paper published in the journal Nature, researchers drew a link between typhoons in Taiwan and small earthquakes in the region. They said that the drop in atmospheric pressure before a storm allows faults in the crust to move more easily and release accumulated strain. Another link has been pointed out between changes in the hydrological balance of the Himalayas and earthquakes. The hydrological cycle is the flow of water in and out of a system through rainfall or snowfall and evaporation, among other processes. When climate change interferes with the existing hydrological balance, causing glacial melts and extreme rain events, the change in the load of water and ice on the surface may trigger seismic activity.

This is already evident in the Arctic where ice sheets are melting at such alarming rates that the Arctic Circle might have no ice by 2030 (see ‘Is Arctic rush worth it?’, Down To Earth, 16-31 May, 2012). Research published in Science Advances in September 2016 states that Greenland alone has been losing about 272 billion tonnes of ice a year over the past decade. GPS measurements show that Greenland and its surrounding region have risen by four to five metres due to the loss of ice load. This movement has been linked to several small earthquakes in the region, which was considered inactive.

Bill McGuirre, professor of geophysical and climate hazards at the University College London, says evidence from the end of the last Ice Age shows that rapid climate change triggered earthquakes of magnitude 8 or greater in Scandinavia. “These resulted from the unloading of faults by melting ice sheets and release of strain accumulated over a long period of time. Looking ahead, a similar response might become evident in other parts of the world such as the Himalayas.” But Gahalaut agrees only partially. “New regions, such as Greenland close to the Arctic Circle, are being increasingly affected by earthquakes. But for places that are far away, there is little risk of this happening,” he says.

Seismology has advanced since the plate tectonics theory became widely accepted in the 1960s, and modern technology to record and measure seismic events evolved. In fact, we have more eyes in the sky today than a few decades ago, with nearly 130 navigation satellites mapping the Earth’s surface to almost every last inch. These satellites are helping seismologists, among other experts, track the movement of tectonic plates and contributing to our understanding of earthquakes. Despite these advances, the prediction of earthquakes remains elusive. Charles Richter, the inventor of the Richter scale, had once famously said that earthquake prediction lay in the realm of fools. “There is currently no evidence that concrete short-term prediction is possible.

Long-term hazard estimates and forecasting is improving with increased knowledge of seismicity, crustal deformation and physics of faulting,” says Roland Burgmann, professor of Earth and planetary sciences at the University of California, Berkeley.

While we do not know when an earthquake might strike, research has enabled us to identify faults that are likely to see seismic activity. Some of these include the San Andreas fault in the North American Plate, the Anatolian fault in the Eurasian plate and the fault under the Sino-Indian plate. Singling out some regions from the others opens the floor to public alarm and exaggeration, but for now, mitigation is the only way forward. “There is a well established school of thought that earthquakes are unpredictable—at least in any useful way that would save lives. The best way to mitigate the impact would be to ensure that human installments such as buildings are made quake-safe,” says McGuirre.

This story was published in Down To Earth Magazine's February 1-15, 2017 issue under the headline "Out of the abyss".