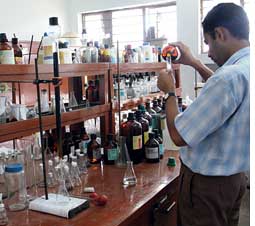 Waste from labs of Tripura University drains into a lake

Tripura Central University doesn't need to worry about tonnes of waste that its science laboratories generate every day. Or so it seems. The university has turned a lake within its premises into a dumpsite. Several people within and outside the university depend on the lake. These people are worried.

B Dinda, head of the Chemistry department, says his department generates about 40 litres of liquid chemical waste every day. It is discharged into a drain, without any treatment, and ends up into the lake. Other departments--zoology, physiology--also discharge wastes that include remains of animals under study, and medicines. Chemicals including arsenic salts, halogen acids, pyridine, picoline and benzene, also get drained in the lake, the source of which is rainwater.

More than a hundred families also use its water for paddy cultivation. Roy, however, adds that the department hadn't considered the risk of groundwater contamination yet. Students use the lake to swim too and this could result in any kind of infection, said Laxman Debnath, general secretary of the student council.

Admitting the problem, Arunodoya Saha, vice chancellor of the university, said they hadn't really gauged the urgency of the issue correctly. He also blamed "financial crunch" until before 2007 for the situation. The university attained the central status in 2007 and more than Rs 500 crore was allotted for the development of the institution. And now, Rs 3.15 crore has been earmarked for its development, which includes cleaning of the water and protection of the water body from external contamination.

"We are planning to set up separate sock piths (a covered cemented dumping tank connected with the drain) for the chemistry and life sciences departments. We will also streamline the solid waste management system," said Saha. But before that, official records revealed that when the university came up in 1987, thousands of crores of rupees was spent on infrastructure, which did not have any waste management plan.

Students allege that officials of the University Grants Commission (ugc) had visited the university at least five times in the past year and raised a lot of questions regarding course curriculum and other issues, but never enquired about the waste management system. "They haven't seen the existing drainage system and haven't interacted with students. We have raised the problem of chemical and gaseous waste disposal practices. On most days, a nasty smell comes out of the laboratories," said Rupak Debnath, a student.

Even the Tripura State Pollution Control Board has not done anything to resolve the issue.

"The issue is really serious but nobody had brought this to our notice earlier. I will take up the matter with the university immediately and ensure that the lake recovers from the damage done to it," said Mihir Deb, chairperson of the board. He added that the university was the highest seat of learning in the state and people would expect it to be the pathfinder of environment protection and be a role model. "What they have done is not acceptable," Deb asserted.

But the student council of the university criticized the board for its ignorance. According to Debnath, some officials of the board and other sister bodies of the state's environment department were doing research in the university and hence should be aware of the situation. "They have ignored the issue because of their limitations," he said.

Abhijit Bhattacharjee, a leading academic and environment activist of Agartala, agrees with the students' cause. "Waste management and chemical effluent discharge are two major issues for any academic laboratory. According to rules, the state pollution control board should monitor it frequently and test the water and soil samples. But the Tripura state pollution control board hasn't done so," he said.