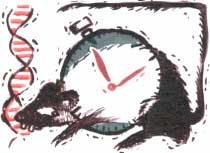 SCIENTISTS in the US have isolated a gene that controls the biological clock in mice. With this, they have moved closer to understanding the cause of a host of human ailments, 'from jet lag to sleep disorders related to aging, to manic depressive illness. Joseph S Takahashi and colleagues from North-western University, have for the first time identified the clock gene' in mammals. The discovery is a major step towards unlocking the mysteries of biological clocks, which are an aggregation of cells that control the daily lives of everything from microbes to man.

"There is every reason to expect that it will inform us about how the human clock works, though practical applications are still a long way off," says Charles J Weitz, a molecular neurobiologist at Harvard Medical School. The biological clocks in most plants and animals work on roughly a 24-hour basis. In humans, the cyclic fluctuations of the clock known as circadian rhythms, govern rhythms like the sleep-wake cycle, metabolic rate, hormone levels, body temperature and the variations in mental alertness. The clock resets itself daily according to the amount of light perceived, and a poorly-adjusted body clock can over a period of time lead to various sleep disorders.

In mammals, the clock is located in a deep central structure in the brain called the hypothalamus, just above the point at which the optic nerves from each eye cross in mid-brain. The hypothalamus contains the suprachiasmatic nucleus, which consists of some 10,000 nerve cells, each containing a tiny clock at the level of its genes and proteins. These cells send out electrochemical signals in a 24-hour pattern. This part of the hypothalamus is connected to other sections of the brain and many body systems use its signal to synchronise their activities.

In previous years, biologists had identified a few individual components of the clocks used by fruit flies and by a microbe called neurospora, which makes bread mould. For years, Takahashi's group has been searching for a clock gene in mice. It administered drugs that produced random mutations in the animals and then bred them. The researchers then screened them for defects in their biological clock to see which gene was disrupted.

Among the offspring, the group found one mouse that had a defective clock gene. The mutant mouse had a basic daily rhythm about an hour longer than normal mice. When the mouse was bred and its progeny crossbred, the scientists found a number of animals whose biological clocks were running four hours longer than normal. When kept in total darkness, these mice eventually lost all circadian rhythm and their activity was completely disorganised.

It took Takahashi and his team three years to identify the clock gene and find out the molecular features of the protein it specifies. Of special interest to the scientists is the finding that one stretch of the protein produced by the clock gene, known as domain, resembles that of the domain seen in the clock proteins of fruit flies and bread mould, though the overall protein structures have hardly any similarity. This lends support to the theory that the circadian rhythms have a common basic mechanism in all living creatures. Steven M Reppert, who studies circadian rhythms at Massachusetts General Hospital, described the discovery as "the first molecular entry into the mammalian clock".

The mouse clock protein was found in abundance not only in the animals' eyes and in the suprachiasmic nucleus of the hypothalamus but also in the testis, ovary, liver, heart, lung and kidney. The researchers are keen to determine whether the protein also regulates the circadian rhythm expression in those tissues. Report says that revelations of such kind will help explain such curiously time-related phenomena as the high incidence of heart attacks in the morning or the increase in asthma at night.