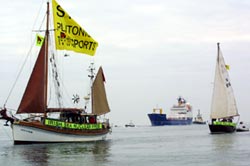 it has been a 57,000-kilometre, three- month-long circuitous round trip for the nuclear cargo of British Nuclear Fuels (bnfl), whose safety documents were falsified. Not only did Japan reject the consignments, as many as 80 governments denied the fleet -- laden with the dubious freight -- access to their territorial waters. The convoy recently returned to Sellafield plant of the company in uk.

The cargo contained plutonium- mixed oxide (mox). It was shipped to Japan in 1999, but was rejected by bnfl's client when the company admitted having forged the safety papers. bnfl conceded that quality checks on the width of the nuclear pellets were tampered with by five staff members.

The Pacific Pintail freighter, which was carrying the consignment was accompanied by the Pacific Teal on its return journey. The ships left Japan in July. Transportation of the cargo had raised serious environmental and security concerns. Many even feared that the cargo could prove to be a target for terrorists. Navy vessels and spotter aircraft were deployed by the Irish Government to monitor the bnfl ships as they sailed off the Irish coast.

Many environmental protest groups have been closely monitoring the ship's journey. Some of their ships had even embarked on a chase with protest banners, fluterring on the vessels. "This plutonium mox should never have been shipped to Japan. If bnfl had its way it would now be loaded into a nuclear reactor, increasing the risks of a catastrophic nuclear accident," said Shaun Burnie of environmental pressure group Greenpeace.

Company authorities seem to have learnt a lesson. Norman Askew, who took over as the head of the British nuclear institution two and a half years ago, said quality control systems were now fully in place. "We have changed our systems. We made a mistake three years ago and we must never forget that," said Askew.