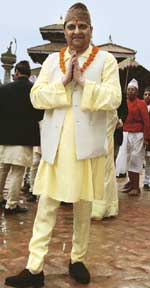 parliament in Nepal is now determined to find out how much property King Gyanendra owns. The government is already preparing a huge tax bill for the king and his family. "We are collecting details of the land and property owned by the king and members of his family and if it exceeds the ceiling, it will be seized," said land reform and management minister Prabhu Narayan Chaudhari.

According to the Nepal Land Reforms Act, citizens are allowed to own up to seven hectares (ha). The government submitted a report that said the royal family owned at least 1,700 ha across the country. While the bulk of it is in Gyanendra's name, there is also a substantial amount of land in the name of his close relatives.

"This is only a preliminary estimate," Chaudhari told parliamentarians. "We think the king and his family members own much more land than this. We are collecting details. The excess land will be distributed among the landless."Officials said the government was also looking for details of land and property owned by former King Birendra and nine other royals killed in the 2001 palace massacre.

Chaudhari had earlier said that the government was planning to draft a new law limiting all royal holdings. The Parliamentary Natural Resources Committee on August 13 directed the ministry of land reforms and management to freeze any bid to make transactions of lands occupied by the king and other royals, so that action can be initiated to nationalise land. The committee also directed the ministry not to let government authorities clear any transactions in case members of the royal family tried to transfer land ownership.