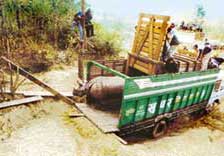 blame it all on the "negative impact of political instability" in Nepal. This seems to be the ready excuse for any untoward incident in the country, even if it is related to wildlife. In the last week of July, the Chitawan National Park authorities found three rhinos dead in adjoining community forests.

The 250-million Nepali rupees rhino translocation project of the Department of National Parks and Wildlife Conservation (dnpwc) has also been stalled and the reason is "political instability". According to park authorities in Chitawan, poachers have killed three rhinos and injured one in a week. Two female rhinos were killed in Chitawan and a male rhino was killed in Nawalparasi. The poachers managed to take away the horn of one rhino. The Chitawan National Park and the Chitawan district forest office managed to rescue the male rhino that had sustained bullet injuries.

In the first preliminary report on the sweeping operation conducted by park authorities, it has been found that 69 rhinos have vanished from the Babai valley of the Bardia National Park in western Nepal. According to the report, 72 rhinos were translocated from the Chitawan National Park and released in the valley between 1986 and 2003. The report says: "Given the probable growth rate over a period of 17 years, there should have been more than 100 rhinos in the area. During a sweeping operation in 2003, only three rhinos were found in the valley. Most of the rhino habitat appears undisturbed by rhino presence, which also indicates that rhinos are not using the habitat anymore."

A field officer at the Bardiya National Park said that even before maoist insurgency, the problem of security was prevalent. "We had to stop the translocation process because the security situation had become unmanageable," he said. But both dnpwc officials and the sweeping operation report blame insurgency. The report reads: "Due to insurgency in the country, the Babai valley has been adversely affected and no anti-poaching operation has been carried out since 2004."