Scientists discover "chimneys" on the sea floor, hope to get an insight into how the ecosystem works 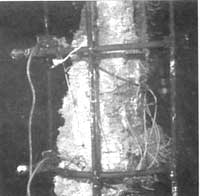 NEARLY two kilometres inside the surface of the Pacific Ocean, molten magma from the Earth's mantle wells up. This process is taking place along the Juan de Fuca Ridge, which is pushing even the Pacific plate apart from the Juan de Fuca plate. The rate at which the plate is being pushed is almost similar to the growth rate of a human fingernail.

Scientists say that cracks are formed in the sea floor. And in this process, sea water just above freezing point enters the cracks and seeps deep into the Earth's interior. Once the water reaches the interior, it heats up to 400c: and collects minerals such as pyrite, sphalerite and silica (The Economist, Vol 348, No 8078).

This super heated water erupts back out through the sea floor. It immediately cools and dumps the minerals. These deposits pile up into vast forests of chimneys that may be as high as 45 metres above the sea floor. The hottest chimneys are known as "black smokers", because the deposit of minerals falling out of the water eventually forms a layer of dark smoke.

Because of the difficulty involved in visiting the area, scientists have not been able to fully understand the formation of these chimneys. The temperature and water pressure at this place are unfriendly to humans. Another problem is that there is no light.

These difficulties forced scientists at the University of Washington in Seattle, USA, and at the American Museum of Natural History in New York, USA, to bring some chimneys home so that they could have a closer look at them. They plucked four chimneys from the sea bed and returned to their base in Seattle on July 18 this year after staying 26 days on the sea.

The process of digging out a live smoker is very difficult. The chimneys are hot to handle, the metallic structures are dense, heavy and fragile, striped with fractures. While bringing out these chimneys, the researchers were not sure whether they would be able to get the chimney to the surface.

For this, LeRoy Olson, an engineer at the University of Washington, developed a barrel-shaped structure of metal rings. This ring-shaped structure was placed over the top of a chimney by a deep-sea vehicle, which was operated by remote control from the surface. After dropping the ring, the scientists tightened cables inside the device around the chimney. Then they maneuvered the vehicle in such a way that the chimney could get apart from its bed. For this they used a diamond-toothed chainsaw. They attached a very long and strong rope to get the whole chimney to the surface. The rope captured the chimneys at one end and brought them to the surface.

The researchers studies the formation of the chimneys after brining them to the surface. They believe that the investigation of these chimneys will help them understand how life had formed on Earth or on other planets, for smokers are more than mere geological oddities.

They are trying to know the strangest ecosystems, in which organisms get by without sunlight, using as an alternative source of energy the sulphurous gas spewed from deep inside the Earth. Scientists have already brought some of these creatures to the surface and studied them. But with a complete chimney, researchers hope to get a better idea of how the entire ecosystem fits together, and how heat and chemical gradients within the chimneys affect the creatures that live there.

Even better, suggests John Delaney, one of the leaders of the expedition, the smokers are spewing out microbes that actually live beneath the sea floor. He hopes that these may resemble the ancient beings that first lived on Earth without oxygen and in a boiling primordial soup. It would be nice to find out without making a journey to the centre of the Earth.