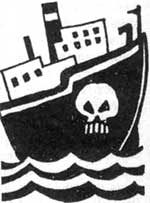 A GERALAN ship carrying a load of the dual-use chemical trimethyl phosphate (TMP) exported from India to Syria is now stuck in Cyprus after Germany refused to allow the cargo to be offloaded for onward shipment. The USA is said to have asked the German authorities to stop the shipment because it suspects the TMP, which has been ordered to manufacture pesticides, will be used by Syria to make nerve gas.

The 45-tonne shipment was exported by the Bombay-based - company United Phosphorous as the second part of a 90-tonne order by a Syrian pesticide-manufacturing firm. Under Indian regulations, the export of TMP is not banned. However, recently TMY has been put under a list of chemicals that need permission before export. It seems USA, the global policeman, will finally have to give the permission.