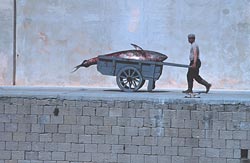 the destruction of the world's oceans by industrial fishing is quite evident in a shocking new report. The analysis suggests that 90 per cent of the large predator fish have been lost in the past 50 years. The era of 'heroic fish' -- the huge swordfish, marlin and sharks -- is also well over. Even other commercially important species, such as tuna, cod, halibut, skate and flounder are now far smaller in size compared with their ancestors. The average size of top predators is also only one-fifth of what it used to be in the 1953.

The study, by Ransom Myers and Boris Worm of Canada-based Dalhousie University, is based on a 10-year analysis. Myers and Worm assembled data sets representing all major fisheries in the world and then constructed trajectories showing the declines of large fish communities from four continental shelves and nine oceanic systems. They found that industrial techniques took as little as a decade or 15 years to reduce fish populations to 10 per cent of their previous number. Whatever is left might disappear soon, as the fish do not get a chance to reproduce.

The researchers assert that fisheries managers have tended to consider only recent data to conserve stocks. This lulled them into thinking that over-fishing is a short-term and local problem. Callum Roberts, a marine conservation biologist at the UK-based York University, says the work underlines how people have got accustomed to the depleted state of the oceans.