Malaria is attaining near epidemic proportions in the country but researchers in Madras hold out a ray of hope. They have produced an environmentally safe pesticide that kills mosquito larvae. 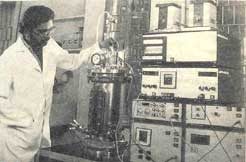 AN ENVIRONMENTALLY safe, biotechnological toxin that kills mosquito larvae has been produced by the Centre for Biotechnology (CBT) at Anna University in Tamil Nadu. Named Biocide-S because it is produced from the Bacillus sphaericus bacterium, the pesticide has been successfully field-tested in a yearlong project at Kochi in Kerala. The Madras municipal corporation is also carrying out a six-month pilot project in the city.

Biocide-S is expected to hit the market soon. The Tuticorin Alkali Chemicals and Fertilisers Ltd, a sister concern of Southern Petrochemical Industries Corp, has bought the scaled-up technology from CBT, but will first test it semi-commercially by producing about 100 tonnes per annum before'full-scale launch of its Rs 5-crore project.

Biocide-S kills mosquito larvae. Explained G Suresh of CBT, "When the biocide formulation is sprayed on stagnant water bodies like drains, wells and tanks, it is absorbed by the quito larvae which are filter-feeders (they filter in soluble matter from the water). The Bacillus sphaericus, which is Jan Mar May July Oct 1991 Jan Mar May July Oct retained in the larva's larvicidal protein (the protein that kills the larvae) released causes pores in the gut of the larva, leading to gut paralysis and death."

In the 1991 Kochi project, biocide was 9prayed in a trial area of 8 sq km once a fortnight. At another test site halfa-kilometre away, a chemical pesticide called Beytex was sprayed, The Centre for Research in Medical Entomology (CRME) in Madurai, which evaluated the project, reported that though the fall in breeding in both areas was almost identical in March, by October the trial area drop in breeding was more than in the chemically tested site. An opinion poll conducted as part of the evaluation also showed that 85.4 per cent of the people living in the area reported a significant fall in mosquito numbers in the trial area.
Another bacterium, Bacillus thuringiensis (type israelensis) was also found capable of producing larvicidal toxins, but CBT opted for Bacillus sphaericus "as the other bacterium showed evidence of cytolytic action (breaking up of cells, including red blood cells) in mammals and we did not want to take a chance without knowing the adverse effects," said Suresh.

The gene in Bacillus sphaericus that produces the larvicidal toxin was first discovered in 1984 by Kunthala Jayaraman and an associate. Four years later, Jayaraman, who had by then joined CBT, discovered a second gene that produces another toxic protein. Said Jayaraman, "The discovery of two genes gave us confidence that there was less chance of mosquitoes developing resistance-to our product."

However, identification of the genes was not enough. Large-scale production required upgrading of technology. A large part of the funds came from the Swiss Deyelopment Corp. CBT opted for a sopbe'anbased medium thdt could produce large quantities at comparatively low costs. While the first 10 litres were pr-oduced in the CBT laboratory, mass production of upto 3,000 litres was successfully carried out at Zurich in Switzerland. Tests at the Hindustan Antibiotics Ltd plant in Pune followed, with technology upscaled to produce 23,000 litres.

CBT is now working on transferring the toxin-producing genes in Bacillus sphaericus to another bacterium, Escherichia coli. This technique has been successful in the laboratory and is expected to reduce costs even further when commercial production becomes possible.