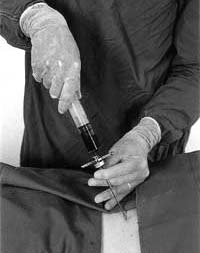 in the not-so-distant future, a new born's umbilical cord may symbolise a new lease of life for patients suffering from terminal diseases. A team of biologists at Tata Memorial Centre's Cancer Research Institute (cri) in Mumbai, India, has developed an inexpensive alternative for invasive and often-precarious procedure of bone marrow transplant (bmt) employing umbilical cord blood.

Using a discarded and easily available tissue - the umbilical cord blood of new-borns - the team of doctors, headed by S G Anand Rao, has designed a simple process to harvest and store pluripotent stem cells from the umbilical cord blood. Stem cells are the precursor cells, also present in bone marrow, that carry the genetic blueprint for generating essential blood components such as red blood cells (rbc) and the platelets.These stem cells have an amazing potential for proliferation and self-renewal - properties crucial for a lifetime of blood-regenerating capacity. The human umbilical cord blood is rich in "progenitor" cells that, by virtue of their source, are at an earlier stage of development than the stem cells from other sources.

Using the antigen cd 34, which is expressed only on the stem cells, as a marker, the doctors confirmed that the fraction of functional stem cells in umbilical cord, somewhere between two to three per cent, is comparable to that of bone marrow - three to 3.5 per cent. Some studies suggest that umbilical cord blood may even contain enough stem cells to reconstitute bone marrow function in adolescents and adults. Cord blood, therefore, appears to be an excellent alternative for bone marrow.

bmt is currently the only treatment for a variety of blood-related genetic disorders such as thalassemia and certain types of anaemia, and also for rebuilding immune systems crippled by cancer therapy. But it is exceedingly difficult to find suitable marrow donors with a perfect tissue match. In our country, the total absence of bone marrow registry severely restricts the choice to siblings, or other close relations of the patient. And even with a perfect match, the immunologically active donor cells often end up causing serious complications known as graft-versus-host disease (gvhd), where the new immune system turns aggressive and subsequently attacks the host itself, with fatal consequences.

The umbilical cord blood offers a number of distinct advantages over the conventional bone-marrow treatment. The lymphocytes in cord blood are immunologically "naive", so a slight mismatch in tissue replacement is tolerated in cord blood transplants. This enhances the potential use of cord blood between siblings to almost 50 per cent, as compared to a mere 25 per cent chance of bone marrow use.

Early clinical trials abroad have confirmed the stability of cord blood stem cells for reconstituting marrow function. Promising results have been recorded in paediatric cord blood transplant cases. In 1988, the first cord blood transplant was performed on a child with Fanconi's anaemia, using cord blood taken from the child's new-born sibling. The success of this operation gradually led to several other such cord blood transplants in situations where bone marrow was earlier used. Several cord blood banks, including an international cord blood registry, have been established in the us and in many European nations to encourage the use of this transplantable tissue.

Transplant records show that sibling and umbilical cord blood transplants have comparable rates of success, and that a majority of cord blood transplants result in engraftment. Evidence also indicates a lesser incidence of gvhd , and less severe reactions in those cases that occur. Cord blood recipients, therefore, have a higher survival rate, better quality of life and lower frequency of transplant complications.

Human umbilical cord blood samples are collected after delivery of the infant and ligation of the cord, without any change to the normal delivery procedure. However, collection must be free from infectious diseases that can be transferred trans placentally.

The risk of transfusion reactions due to abo blood group incompatibility and inconvenience in long-term storage of large volumes of cord blood have been major drawbacks in cord-blood banking. Techniques to eliminate the rbcs - the root of transfusion incompatibility - must not damage the valuable stem cells and maintain sterility at all costs. The efficient one-step dextran sedimentation process devised by the stem cell biologists at the cri achieves this easily.

Dextran sedimentation technique uses beads of dextran, a polymer glucose with high molecular weight, to coat the rbcs. The rbcs clump and settle down at the bottom of the blood bag in a layer that is drained out later. The remaining fluid, that contains a high concentration of transplantable stem cells, is transferred to a freezing bag. This simplified procedure can be executed safely in a sterile closed system with minimal manipulation, thus reducing chances of microbial contamination. The only specialised piece of equipment is a compu-ter-controlled storage unit in which the samples are frozen and preserved in liquid nitrogen at a temperature of -196 c.

The research team at cri now proposes to transfer this technology to all centres that can afford a cord blood banking service. Cord blood is expected to be of much more use in the emergent field of gene therapy, as stem cells are ideal targets for the introduction of new genes that must function for a lifetime. In future, gene therapy may be used in the treatment of genetic disorders such as haemophilia, sickle-cell anaemia, blood disorders, aids and perhaps, even cancer. The possibility that chronic anaemia - acquired as well as hereditary - may respond well to stem cell transplant has given hope to thousands of patients who, earlier, had little or no treatment for these diseases.