New chip on the firmament

A microchip developed by a US firm will greatly increase the working speed of personal computers. But the chip's long-term success will depend on reducing its high power consumption 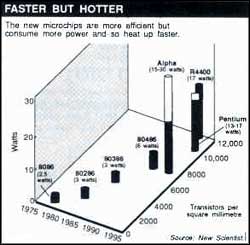 THE PERSONAL computer on your desk could soon be processing data at 10 times its present speed following the introduction of the most advanced microprocessor chip for PCs yet -- the Pentium, made by Intel Corp of USA (New Scientist, Vol 138, No 1873).

The Pentium, also one of the most complex computer chips ever made, incorporates 3.1 million transistors into a thin wafer of silicon 16 mm by 17 mm across. It can perform calculations at the rate of 112 million instructions per second (mips), as compared to 54 mips for the currently fastest Intel chip, called 486.

The Pentium is the latest member in Intel's X86 series of microprocessors, which the company claims are at the heart of 70 million of the 100 million PCs sold worldwide. The first member of this series -- the 8086 -- was the basis of the original IBM-PC in 1981, and subsequently became the standard for the entire industry. It was followed by three chips named 286, 386 and 486, each more powerful than its precursor.

In this series, the Pentium corresponds to 586 (it was given a different name for copyright reasons). The key feature of these microprocessors is that they are all compatible with each other -- software written for one microprocessor can also be run on those developed later. Thus, each time Intel introduced a new chip, the basic design of the PC and the software written for it did not have to be modified.

The development of the Pentium was motivated by the advent of a new generation of powerful microprocessors made by rival manufacturers. These chips, such as Mips Technologies' R4400 and Digital's Alpha, are able to achieve huge computing speeds, but are incompatible with Intel's X86 chips because they are based on a new design pattern called RISC (Reduced Instruction Set Computing).

The Pentium was designed to meet the need for a microprocessor that would match the power of the new microprocessors, but be compatible with the old ones. In doing this, Intel's engineers were faced with a difficult choice: If they ignored RISC, they would not be able to compete with the new generation chips in terms of performance and if they accepted RISC, their product would be incompatible with the chips it was intended to replace.

In the compromise that was finally worked out, many of the desirable features of RISC were retained without deviating too far from the original design. For instance, it was decided to adopt what is called a superscalar architecture, a feature of many RISC microprocessors, which refers to a design that enables the chip to simultaneously execute two different sets of instructions on two different pieces of data. This boosts the processing speed just as widening a one-lane highway to two lanes speeds up the flow of traffic.

Although the Pentium is many times more powerful than the 486, its complexity is also a limitation. It is prone to errors in fabrication because of the large number of circuit elements it contains -- even if one of the 3.1 million transistors is defective, the whole chip will be useless. Another weakness is that the Pentium consumes at least 13 watts of power as compared to 6 watts consumed by the 486, because of which machines based on the Pentium will need larger cooling fans. But Intel is hoping that the advantages of extra-powerful PCs will more than compensate for these minor glitches.