New drugs on the block

The development of new drugs could contain the spread of malaria 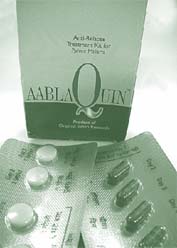 the past few years have seen an alarming increase in the number of malaria cases. The World Health Organisation ( who ) puts the annual number of cases between 300-500 million, and deaths between 1.5-2.7 million. Controlling the disease has become difficult due to insecticide resistance in the mosquito and difficulties in implementation of vector control programmes, among other reasons. In fact, there are fewer tools to control malaria now than there were 20 years ago.

As the struggle to control the disease continues, many research institutes have come up with new drugs. One of them is the Central Drug Research Institute ( cdri ), Lucknow, which has come out with a drug called cdri compound 80/53, also known as Aablaquin. The drug is less toxic than Primaquine, which is used widely to cure relapsing malaria caused by Plasmodium vivax . "The parasite is present in both the blood and tissue such as liver," says O P Asthana of cdri . Chloroquine, another commonly-used drug kills the parasite present in the blood, but fails to affect the pathogen in the tissues which can then reproduce and cause the relapse. Primaquine, though effective, has been found to be toxic. This toxicity can lead to side-effects such as gastrointestinal disorders and breakdown of red blood cells leading to acute anaemia. Moreover, the drug cannot be given to small children and pregnant women. Trials conducted on nearly 700 patients by the New Delhi-based Malaria Research Centre found that the relapse rate for Chloroquine was the highest (41 per cent) followed by Aablaquin (30 per cent) and Primaquine (28 per cent).

"Though the relapse rate of the new drug is slightly higher than that of Primaquine, the lower toxicity is significant," says Asthana. "The toxicity of the drug is lower as it has been purified and the toxic components have been removed," says Ram Pratap, a scientist with cdri . The new drug has been launched by Nicholas Piramal India Limited, Mumbai, and called Aablaquin. Sanjay Chitkara of Nicholas Piramal says that since the product was launched after the malaria season, they do not have actual sales figures but most physicians feel that the product is very good.

However, experts have a word of caution. Says V P Sharma, former director of Malaria Research Centre and now with the who 's Roll Back Malaria Programme: "More clinical trials must be carried out to assess the risks of the drug before it is given indiscriminately to patients." Giving an example, he says: "Trials of this drug have not been conducted on people deficient in the enzyme g6pd , lack of which can cause the breakdown of the red blood cells when given the drug."

Another drug called a , b -Arteether, earlier launched by cdri, is being used to cure patients suffering from Plasmodium falciparum, a different strain of pathogen. The drug is prepared from artimisinin, a chemical derived from a Chinese plant called Artimisia annua . Scientists at the Central Institute of Medicinal and Aromatic Plants ( cimap ), Lucknow, have helped cdri scientists by successfully developing a variety of the plant. "Work is being carried out to develop plants which have high artimisinin content," says A K Singh, a scientist with cimap .

The product is available in the form of an injection and is marketed by Themis Chemicals, a Mumbai-based pharmaceutical company. Clinical trials show that the relapse rate of this drug is as low as seven per cent. Post marketing surveillance indicates that the drug is effective and does not produce any side-effects. "The drug has peroxide bridges which liberate oxygen and cause imbalances in the red blood cells ( rbc) . This bursts the rbc and cuts short the life cycle of the parasite," says Asthana. "To counter the dependence on plant sources, we are looking for synthetic compounds which are active against the drug-resistant malaria. We hope to introduce alternatives in the next 3-4 years," says C M Gupta, director, cdri .

Researchers from the Indian Institute of Science, Bangalore, are trying another tactic. Govindarajan Padmanaban and colleagues found that a chain of amino acids produced synthetically in the laboratory can disrupt the production of an essential protein by the parasite. The parasite produces a protein called haem using an enzyme from the host. The synthetically-produced chains occupy those sites on the parasite where the enzyme usually binds. This does not allow the enzyme to mediate the process of haem production. The fact that the parasite imports proteins from the host has opened up a new area in research. "We are trying to design smaller chains of polypeptides and use these chains to deliver drugs like Chloroquine to the site," says Padmanaban. "We hope to overcome the resistance in the parasite against Chloroquine as these peptides are not be thrown out by it, consequently keeping the Chloroquine inside too," he adds. One of the advantages of using these peptides for drug delivery is that only infected rbc take them in and this reduces the side-effects.


Research to find a vaccine against the disease is going on the worldover. Different types of the vaccines are being developed which work both at the liver and blood stage of the parasite. Vaccine directed towards the liver stage do not allow the formation of the blood stage and helps in treating an infected person. On the other hand, transmission blocking vaccines ( tbv) are useful in preventing the spread of the disease in the community as they work against the sexual stage of the parasite. A number of vaccines have been tried on humans. The one that has been tested most extensively is a vaccine called sp f 66 made in Colombia. Though it worked well in south America, protecting about 50 per cent of those who received it, but it did not work in Africa and Thailand.

"Experiments reveal that it is possible to protect people to some extent from malaria by vaccination for some months," says Brian Greenwood, London School of Hygiene and Tropical Medicine, Infectious and Tropical Diseases. "Malaria will never be controlled properly in the highly endemic areas of Africa without a vaccine," he says.

Two dna -based vaccines, one developed by scientists at the Oxford University, uk , and another by the us Navy Malaria Unit, are expected to be tried on humans within the next year, says Michael Aidoo, a us- based researcher on malaria. "The major goal of all scientists is the prevention of the life-threatening malaria and its associated complications in children who are at a high risk. As it is difficult to evaluate the efficacy of the vaccine, researchers are using reduction of anaemia and cerebral malaria as the criterion for measuring its effectiveness," he says.

Researchers on malaria feel that the malaria vaccine may hit the markets in the next 5-10 years. "Making a vaccine that is highly-effective, safe and gives a long duration of protection is going to be difficult," says Greenwood. "Even when an effective vaccine has been developed, the cost is likely to be a problem -- will poor people be able to afford it ?" he asks.

Reported by Vibha Varshney in Lucknow