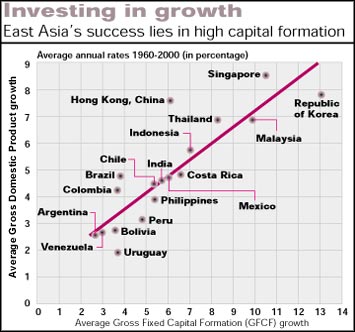 • Developing economies of the East are racing past their counterparts in the West. From 1974 to 2000, East Asia's gross domestic product (gdp) grew at an average rate of 6.3 per cent annually in comparison to Latin America's 2.8 per cent

• Three indicators -- investment trends, the industrialisation process, and competitiveness -- reveal why the two regions are not in tandem

• At 20 per cent, Latin America's gross capital formation as a percentage of gdp remains below 1960 levels. In contrast, East Asia's investment increased steadily, crossing 30 per cent in the early 1990s

• In the same period, industrial output as a share of gdp declined from 28.1 to 17.8 per cent in Latin America and increased from 14.6 to 27 per cent in East Asia