From missiles to VCRs, a scintillating change is foreseen, At a smart new breed of semiconductors enter the realm of electronics 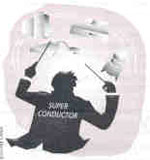 RESEARCHERS report that discovery of an unique chemical process could lead to the development of new semiconduc- tors and revolutionise the future of commercial computers.

Scientist at the Research & Technology Department of the us Naval surface Warfare Centre in White Oak, GerA have found a new way to quality insulator films on arsenide semiconductors - a previously thought to be Responsible.

"This new discovery has the potential to change any kind of electronics, MiMiles to VCRs (video cassette says physicist Francisco a member of the research &a dwovered the new process, bbq in the electronics industry that exist today based on silicon, can now be based on gallium arsenide and run 10 times faster.

According to researchers, gallium Arsenide is intrisinically a better semiconducter than silicon, which is used in all electronics devices. For WWctrons travel at a higher Miosoa arsenide than they do MMMM Img the development Of higher performance systems in such as a high speed computing and microwave communication.

What enables people to make (elec- Tronic) devices on is the insulator Silicon dioxide - which grows rain - Ommil physicist Tak-Kin Ober of the pioneering Mod n*,, no good M dam to grow on perlect candidate a efficient transis I the White Oak chemical inter anierkide and an insulting later structured ared of barium bromide there appeared no way to realize its full potential.

There reaction would found, allows the making of an insulating layer on gallium arsenide this year in turn, enables thefabrication of electronic devices on gal- lium arsenide. This is the break- through," Santiago said. "Just by changing the material, you can create a new generation of very fast computers," he added.

The new process involves a mampulation of the surface chemical reaction that takes place between gallium arsenide and the barium fluoride molecules. Since the reaction occurs on the surface only, it does not affect the intrinsic properties of gallium arsenide. According to Santiago, there have been several attempts made in the past to grow insulating films on gallium arsenide, but all have faded.

"And the barium fluoride layer has been shown to have very good insulating properties, probably better than the silicon dioxide on the silicon wafer," Santiago said. But be commented that more work has to be done before the new process could beput into commercial use.

"We need to show the actual potential of this technology by making a transistor, using the barium fluoride as the gate insulator," he said, adding, "This will be our real test. We may find out that some of the properties that give us this insulating film may kill the transistor." And then, he added further with some caution, "But so far, so good. We are excited because we haven't seen any results that are disappointing."

Notwithstanding all these advancemerits, the influence of the "atomic glue" on the movement of electrons still has to be investigated, feel researchers. They emphasized that commercial use of gallium arsenide circuitry is not expected for at least five years. It is also unlikely that gallium arsenide will replace silicon completely since ultra high speed is not required for many commercial applications.