The discovery of a simple procedure for synthesis of a new crystalline form of carbon has opened up immense possibilities in the field of superconductivity. 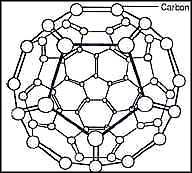 BUCKYBALLS or fullerenes, a newly discovered form of carbon, have opened up a new field in carbon chemistry and new applications are coming to light in electronics and electrochemistry. Japanese scientists have recently made thin films of fullerene crystals that show the electrical behaviour of semi-conductors such as silicon. Other groups are exploring technological applications ranging from lubricants to catalysts (New Scientist Vol 136 No 1845; World Scientist No 51).

Fullerenes are a football-shaped form of carbon, which comprise 60 or more carbon atoms arranged in a structure similar to the geodesic dome, which was designed by American architect-engineer Buckminster Fuller. These carbon 60 (C60) structures, variously named after Fuller as Buckminster fullerenes, simply fullerenes or Buckyballs, are made up of 32 surfaces, 12 of which are pentagons and 20 are near-regular hexagons.

The existence of such molecules was suggested in the 1970s by Soviet theoretical chemists in an attempt to explain the observed anomalies in the absorption and emission bands of radiations from interstellar matter, whose origins confounded scientists. This controversial hypothesis generated a great deal of research in the 1980s, as physico-chemists attempted to manufacture new carbonaceous molecules.

Prior to fullerenes, the only two known crystalline carbon structures were diamond and graphite. Now it has been established that C60 is not the only form. While C70 and C84 have been identified, scientists suspect C180 and C240 also exist. While scientists believe that a whole assembly of these carbon cages exist in nature, they have yet to observe and establish their abundance in the universe.

Fullerenes were first produced at Rice University in Texas by R E Smalley in the mid-1980s. His technique consisted of striking with a laser beam a disc of graphite, enclosed within a helium chamber. He found the carbon atoms removed from the graphite surface cluster together to form various molecules, some of which are Buckyballs. Since then, numerous groups across the world have attempted to synthesise this new carbon form.

Scientists are interested in fullerenes because their spherical shape gives them unusual magnetic and electronic properties. The magnetic properties seem to vary with the number of carbon atoms forming each structure. Some forms have been shown to be superconductive but, till recently, it was difficult to produce fullerene crystals perfect enough for use as semi-conductors. A team led by Satoru Isoda at Mitsubishi Electric overcame this problem by using a process that involves shooting fullerene molecules out of a nozzle and ionising them with an ionised cluster beam. They are then accelerated by an electrical field onto a substrate, where they form a thin film.

This technique ensures the crystals formed are perfectly aligned, which is important in giving semi-conductors predictable properties. As in conventional semiconductors, where scientists add varying quantities of other materials to the crystal to alter its electrical properties, scientists have introduced boron and phosphorus here, too, and succeeded in enhancing the conductivity of the film some eight times.

Attempts to incorporate one or more metal atoms inside the fullerenes to change their electrical properties have also been made. Scandium, yttrium and uranium are some of the atoms scientists are experimenting with and they believe the new materials obtained could be applied in batteries and electrodes.

It may also be possible to use C60 fullerenes as lubricants because the molecules behave like microscopic ball-bearings. Scientists in Israel and the US are studying the properties of compounds formed by getting fullerenes to react with fluoride or hydrogen. The compounds formed, they reckon, could constitute components of materials that are stable at high temperatures.