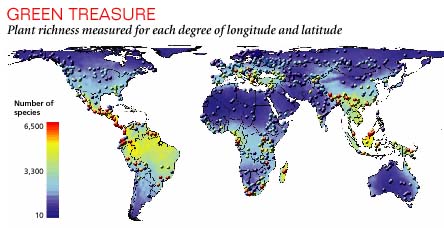 now it will be easier to gauge the likely impact of climate change on the services plants provide human beings. Researchers at the University of California and the University of Bonn in Germany have produced a global map of estimated plant species' richness. The map, which accompanies a study published on April 3, 2007, in the Proceeding of National Academy of Sciences (Vol 104, No 14) highlights areas of particular concern for conservation.

"Plants provide important services to humans--ornaments, food, materials for drugs and alternative fuels--that increase in value with their richness," says Walter Jetz, assistant professor of biology at ucsd and one of the authors of the paper. Tropical countries are almost 10 to 100 times more in richness than most parts of the us or Europe.

The study concluded that evapotranspiration, number of wet days per year, topographical characteristics and diversity of habitat are the major factors responsible for species richness. For example, the South African Cape region contains more than twice as many species as expected by the global environmental model.

"The map highlights areas of particular concern for conservation and helps pinpoint areas that deserve further attention for the discovery of plants. It also helps assess impact of climate change," Jetz said.