New Hampshire has become the first state in the US to take on oil giants such as ExxonMobil and ChevronTexaco over widespread contamination of its surface water and groundwater due to gasoline additive methyl tertiary butyl ether (MTBE). The state has sued 22 corporate entities, including MTBE manufacturers, refiners and big brand marketing firms, apart from the oil majors 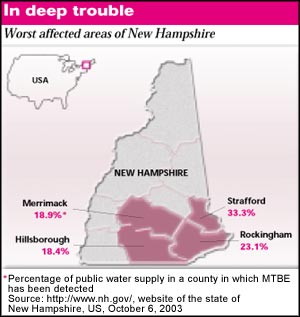 new Hampshire has become the first state in the us to take on oil giants such as ExxonMobil and ChevronTexaco over widespread contamination of its surface water and groundwater due to gasoline additive methyl tertiary butyl ether (mtbe). The state has sued 22 corporate entities, including mtbe manufacturers, refiners and big brand marketing firms, apart from the oil majors.

The lawsuit, filed in the Merrimack County Superior Court on September 30, contends that for more than a decade the companies have been mixing dangerously high amounts of the toxic oxygenate with gasoline. The state alleges that the manufacturers and refiners have made a defective product, creating public nuisance and violating local environmental laws.

The plaintiff is seeking all costs associated with addressing the problem, including significant amounts spent on investigation and cleanup. The court has been requested to assess monetary penalties as well. Making out the state's case, New Hampshire attorney general Peter W Heed reportedly observed that mtbe has become a major threat, especially to underground aquifers. Around 60 per cent of the population in the state relies on groundwater for drinking purposes.
Since 1979, mtbe has been used in New Hampshire as an octane-enhancing replacement for lead. At around the same time, the United States Environmental Protection Agency (epa) registered mtbe as a fuel additive. Although it was used in low concentrations (8 per cent by volume) in gasoline in the 1980s, the industry increased the content to 11-15 per cent after 1990.

The development coincided with the launch of the federal government's 'Reformulated Gasoline (rfg) Programme'. Under this, refiners are required to supply oxygenated or reformulated gasoline in cities where air pollution is high. While mtbe helps to achieve the stipulated level of oxygen in fuel with an 11 per cent (by volume) concentration, only 5.4 per cent of ethanol -- a safer option -- does the trick.

On October 22, 1991, New Hampshire implemented the rfg programme in the Merrimack, Hillsborough, Rockingham and Strafford counties. However, in May 2001, the state submitted a petition to epa seeking to withdraw from the programme on the ground that mtbe was proving to be a contaminant. The plea is still pending.

mtbe is considered a potential carcinogen. Worse still, it has high affinity with water and, therefore, spreads rapidly in groundwater. In New Hampshire, mtbe has been found to seep from fuel tanks and pipelines despite stringent storage regulations. Its effect is noticeable now, with the locally supplied drinking water acquiring a peculiar taste and an offensive smell.
The state buttresses its argument through statistics. According to the data, mtbe was found in more than 13.2 per cent of public water supplies and about 40,000 private wells tested across the state in 2002. It was detected in 22.2 per cent of the supply sources in counties under the rfg scheme (see map: In deep trouble).

Focusing on a related aspect, Heed points out: "We will prove that refiners opted for the cheaper oxygenate mtbe instead of others that would not have threatened the state's waters." Interestingly, the rfg programme leaves it to refiners to decide on this. The mtbe row has erupted in other parts of the us earlier, with California banning its use.
August 2000 saw the Indian government planning to make the use of mtbe mandatory. Expectedly, the move drew flak from civil society groups. N R Raje, director of Indian Oil Corporation's research and development centre, reveals: "The initial 5-10 per cent gasoline production involved mtbe blending, but the scale did not widen." This was because the focus shifted, with the Union ministry of petroleum and natural gas declaring that ethanol would be introduced in a phased manner.

"It is not necessary for refineries to use mtbe now because the octane requirement is also met through various refinery processes," explains Raje. At present the Indian specification for gasoline limits mtbe at 15 per cent by volume and ethanol at only 5 per cent. However, H B Mathur, former professor, Indian Institute of Technology, Delhi, avers: "The percentage of ethanol should be at least half of that of mtbe to attain the stipulated level of oxygen in fuel."