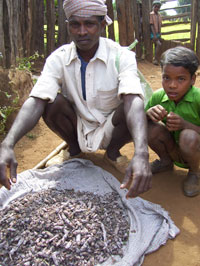 In a much awaited move meant to ensure effective enforcement of the Forest Rights Act (FRA) of 2006, the Union tribal affairs ministry has proposed amendments to the rules under it.

The draft rules, issued on July 20, aim at giving more authority to the community in the process of settling rights and ensuring that the communities can easily claim their rights over community forest resources, including minor forest produce (MFP) like bamboo and tendu leaves. The ministry has invited objections and suggestions on the draft rules from the affected people within 30 days before it finalises the new rules.

FRA recognises the rights of the forest dwellers over forestland and its resources which they have traditionally been using. The resources include MFPs and community forest resources like water bodies, sacred groves and pastures. The implementation of FRA started in January 2008. But even after four years, the Act has failed to benefit most of the forest dwellers. Its implementation has been obstructed by state forest departments that are unwilling to cede control over forest resources, a major source of revenue for the departments. Tribal rights activists blamed the ambiguities in the rules of the Act for its ineffective implementation.

In January last year, a joint committee of the ministry of tribal affairs and the Union Ministry of Environment and Forests and the Sonia Gandhi-led National Advisory Council had also recommended several changes in the Act as they were unhappy with its implementation. They had recommended that under the Act, gram sabhas (village councils), which are the basic units for the implementing FRA, should have been constituted in each and every hamlet. However, at many places the gram sabha meetings were called by the panchayats, which have jurisdiction over several hamlets. This resulted in these small villages being left out of the implementation of the Act. The new rules make it mandatory that the gram sabha should be constituted at the hamlet level.

The draft rules also propose to increase the mandatory tribal membership of village forest rights committees that verify forest right claims from one-third to two-third. They reduce the present requirement of quorum of gram sabha meetings from two-third of its members to half.

The ministry data shows that till May this year, more than 50 per cent of the forest rights claims have been rejected by the authorities. The draft rules mandate that no claim should be rejected  without giving opportunity to the claimant to present his case against the rejection. The rules also say that the sub-divisional and divisional level committee will have to give the reason in writing before rejecting any claim approved by the gram sabha or before modifying any resolution of gram sabha. At many places where communities have been granted rights over MFP, forest departments have refused to issue transit passes  needed under state laws to transport the produce outside the forest for trading. The new rules allow transportation of minor forest produce  within and outside forest area through “locally appropriate means of transport” for use or sale of such produce.

The new draft rules also spell out the procedure for communities claiming rights of conserving, managing and protecting community forest resources, which was not part of the rules in force at present. This includes the rights of habitation for the particularity vulnerable tribal groups of the country and the grazing rights of the pastoralist communities.

They also put greater responsibilities on the state-level monitoring committees for better implementation of the Act. The committees will have to meet every three months and furnish quarterly reports on the implementation to the ministry as against half-yearly report that they furnish now. They will also have to consider and address the field level problems in implementation.