Meant to check use of toxic phthalates 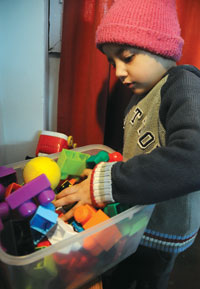 TOY makers use phthalates to make plastic toys supple and chewy. But the chemical also happens to be very toxic and its use in the Indian toy industry remains unregulated. The Bureau of Indian Standards (BIS) has finally drafted standards for phthalates in toys and childcare products so that their use can be regulated. The standards are likely to be notified by September-end.

BIS released the draft standards on April 21, following directions of the Bombay High Court, which had acted on a public interest petition filed by Mumbai non-profit Consumer Welfare Association in 2007. Studies show that phthalates damage male reproductive system, impair lung functioning and affect pregnancy (see ‘Pthalates are harmful’). The petition sought stringent regulations for phthalates in toys. BIS was supposed to issue the standards by June 30, but took extension till September. The court had ordered that the standards should be made mandatory within two months of notification.

The new norms will be included in part 3 of the BIS standard for safety requirements of toys (IS 9873), which deals with ‘migration of certain elements’ (ingestion of elements in toys). “To begin with, we are introducing the phthalates standard for toys. Then parts 1 and 2 of the standards will be taken care of,” says an official of the Department of Industrial Policy & Promotion (DIPP), which will enforce the standards. The first two parts of the standard deal with mechanical and physical properties of toys and standards of flammability.

The draft has some shortcomings. It contains no regulations for DINP, DIDP and DNOP for toys and products meant for children above four. It makes no distinction between toys and childcare items. Another major shortcoming is that the standards have been set for individual phthalates; there is no limit prescribed for toys with two or more phthalates.

While drafting the regulations, BIS took into account a study by the Centre for Science and Environment, a Delhi non-profit. The 2010 study revealed all toy samples contained at least one or more phthalates. It showed 60 per cent soft toys and 20 per cent hard toys contain more than 0.1 per cent phthalates— the safe limit set by the EU standards (see ‘Lethal Games’, Down To Earth, January 31, 2010).

The Toy Association of India (TAI) says the rules may not help curb phthalate use because there is very little infrastructure to test their presence in toys. Scientists at the National Institute of Nutrition, who are preparing a report for the Supreme Court on phthalates and heavy metal content in toys, say the government may not have well-equipped laboratories for testing toys. The DIPP official, however, says the BIS-accredited laboratories are well equipped to do the job. The toy manufacturers also raised concern about the unorganised toy manufacturers. “BIS is setting standards for phthalates, but will someone talk to the unorganised sectors also on how to keep these in check. BIS should also suggest alternatives for phthalates,” says Raj Kumar, president of TAI.
News News News Toy Makers Toxins Public Interest … Public Interest … Plastics Plastics Plastics Pesticides And Toxins Pesticides And Toxins Pesticides And Toxins High Court Health Effects Health Effects Health Effects CSE Study Child Health Bureau Of Indian …
SUPPORT US