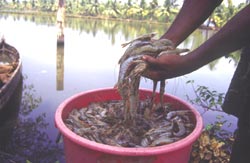 in a development that threatens to plunge the Rs 6600-crore Indian seafood exports industry into crisis, the us has decided to introduce strict curbs on antibiotic content in imported marine products. The new protocol, being formulated by the us Food and Drug Administration, is meant to regulate antibiotic residues in frozen shrimp consignments entering the country. For India, the impact of the us move will be even more pronounced because the eu had put in place similar safeguards in April this year and the two regions constitute nearly half of India's seafood export market.

Shrimp accounts for about 60 per cent of Indian marine product exports in value terms. Since the mid-1990s, there has been a quantum jump in India's shrimp exports, thanks to the advent of aquaculture. Today, shrimp cultured in these farms makes up more than 50 per cent of the total exports of the product from India. Aquaculture is done on 1,50,000 hectares spread across Andhra Pradesh, Tamil Nadu, West Bengal, Orissa and Kerala.

It is noteworthy that ever since their inception, most aquaculture farms in the country have been routinely using antibiotics to control diseases and promote growth of seeds. However, of late, many shrimp importing countries have begun introducing more stringent norms for antibiotic residues in seafood imports. The clampdown has been particularly severe in the case of antibiotics belonging to the chloramphenicol and nitrofuran family.

These drugs are banned in the us and the eu. While the former put curbs on chloramphenicol in 1985, the latter followed suit in 1995. Marine Products Export Development Authority (mpeda) director J Bojan reveals that the new maximum permissible limits set by these countries for chloramphenicol and nitrofuran are 0.3 parts per billion (ppb) and 1 ppb, respectively. In India, the use of the two antibiotics, along with neomycin, nalidixic acid and sulphamethoxazole, was prohibited in August 2001. Maximum residue limits were also set for 15 other antibiotics in shrimp products meant for exports.

"Antibiotics in marine food is a burning issue," feels K Devadasan, director of the Kochi-based Central Institute of Fisheries Technology (cift). According to official sources, there have been quite a few instances in the recent past of Indian consignments being rejected because of high antibiotic residue levels. For instance, earlier this year, France and Italy refused to accept seafood from India on the ground that it contained banned antibiotics. But Indian marine product exporters stress that these measures actually amount to raising of non-tariff trade barriers.

Y S Yadava, member secretary, Aquaculture Authority, however, opines that the drastic steps are a blessing in disguise as they would usher in quality consciousness in the Indian aquaculture industry. The authority is a Chennai-based regulatory body. It has decided to cancel the licences of farmers who are using banned antibiotics. "But so far, no agency has approached us with complaints," discloses Yadava.

He avers that farmers in India have by and large stopped using banned antibiotics. Only a few gullible ones continue to err since they are either misled by dubious consultants or are unaware about the presence of the substances as a part of inputs. R Ganapathy, former director, mpeda, informs Down To Earth that the authority has recorded a total of 173 inputs such as feed meals and water purification materials that are being used by the industry. Many such inputs contain pharmacologically active compounds that go undetected because suppliers do not specify their contents.

Bojan points out that as per stipulations, if antibiotics and drugs are used, enough time should be given before harvesting to expel or metabolise such materials. In tropical conditions with a temperature of 25-30 degrees Celsius, 15 days would be adequate. The problem arises when farmers resort to distress sale if the disease is not cured, he says.

Last year, the Union government declared that it would set up 30-odd facilities to detect and measure banned antibiotic residue levels in shrimp which is harvested and exported. These are currently being installed in mpeda labs. Further, institutes like cift are to be equipped with sophisticated instruments. Officials contend that often a periodic review of norms is intended to prop up manufacturers of such costly gadgets in developed countries.