Coming under pressure from multinational mining companies, Australia’s ruling Labor Party changed the prime minister—without voting. The mining magnates had vociferously campaigned against a 40 per cent mining tax proposed by the ousted prime minister Kevin Rudd and threatened to halt projects. Some stopped work at the mines. A week after assuming office on June 24, Prime Minister Julia Gillard held a close-door meeting with the magnates and reduced the tax to 30 per cent. The tax, which comes into effect in 2012, would now be applicable to iron ore and coal, rather than all minerals as proposed by Rudd, and would kick in only when profits exceed 12 per cent rather than the 5 per cent in the original plan. Only 320 mining companies will come under the tax net instead of 2,500.

Fishers in Egypt sued the government for covering up an oil spill in the Red Sea. Spotted in the last week of June, the spill has since polluted 17 islands and affected fisheries and tourism, said the Cooperative Water Resources Union, a fishers’ body. The islands, famous for resorts and diving spots, draw millions of tourists every year; tourism accounts for 11 per cent of Egypt’s gross domestic product and is a vital source of jobs and foreign currency. The union claimed the spill was caused by an offshore rig of the Geisum Oil Company, partly owned by the government. The government said the spill was not caused by any of the 188 oil platforms in the area. However, the ministry said it is considering reducing the number of rigs.

A US Senate panel on July 7 voted to lift all caps on liability that oil companies would face for damages from offshore oil spill. The amendment to the Oil Pollution Act of 1990, if approved by Congress, would expose the oil industry to unlimited compensation for economic losses suffered by local businesses and communities and for damages to the environment. Currently, oil firms enjoy a cap of US $75 million. The amendment would apply retroactively to the spill caused by British Petroleum in the Gulf of Mexico. The ruptured oil well has poured millions of litres of crude into the gulf since April 20.

Another Senate committee has passed a bill to increase civil and criminal penalties on the oil drilling industry for an oil spill and stringent requirements for deep water drilling permits.

The US Food and Drug Administration (FDA) is considering whether to approve the first genetically modified animal that people would eat. The GM salmon can grow double the size and get ready for sale in 18 months instead of three years. The developer of the salmon, AquaBounty Technologies, said FDA has signed five of the seven sets of data required to analyse if the fish is safe to eat and for the environment. Green groups oppose the approval, saying the GM fish is not safe for consumption and would breed with the wild fish and wipe out their species. They have also criticised FDA’s approval process. “There is no opportunity for anyone from outside to see the data or criticise it,” said Margaret Mellon of Union of Concerned Scientists, a non-profit in USA.

Forte dei Marmi, a sea town in Italy’s Tuscany district, is in revolt against outsiders. Designed by Michelangelo, the town with a beautiful landscape is a tourist attraction. In recent years millionaires from worldwide, mostly from Russia and Germany, are buying villas in the town, driving the property prices out of control and making it difficult for the town’s residents to secure a plot. The town mayor has introduced a law that states only local residents can buy houses in the Forte dei Marmi. 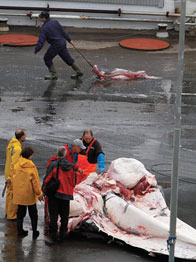 An international effort to limit whaling collapsed on June 23, leaving Japan, Norway and Iceland free to kill the mammals. At the annual meeting, the International Whaling Commission pushed for a compromise deal between anti-whaling and whaling nations. It proposed to replace the 24-year-ban on commercial whaling with limited hunting quotas, which would be phased down to zero over 10 years. The three whaling nations offered to limit their catch but refused to phase it out completely.

Delegates could not agree on the size as anti-whaling nations insisted on a complete end to whaling. A week later, Iceland announced the beginning of its whaling season with a self-imposed quota of 150 endangered fin whales and 100 minke whales. Japan convicted whaling activist Peter Bethune, who was arrested early this year.

Egypt’s foreign minister recently met the heads of five upstream Nile basin countries and said his government would offer them financial support for development. He did not reveal who would receive how much, but hinted Ethiopia, which contributes 85 per cent of the Nile water, would receive the maximum aid. Political analysts say Egypt’s move is to abort the Nile treaty the countries signed in May to share the Nile water equally. Egypt fears its supply would be severely reduced if upper stream countries divert the river.

As the European Commission scrambles to prepare a draft to meet its renewable energy target, bulk of its member states missed the deadline of June 30 to submit their action plans. The EU plans to source 20 per cent of its energy from renewables by 2020. Nine of the 27 members, including the UK, Denmark, the Netherlands and Sweden, have submitted plans of ways to meet their share of the targets, which will be binding.

Most countries plan to increase their capacity of wind farms, solar farms and source energy from biomass. The European Renewable Energy Council says the 20 per cent target is technically feasible and would provide a sizeable boost to the European economy in terms of revenue and job creation.

A group of Brazilian lawmakers, known as the ruralists, are pushing a bill to change the country’s 1965 forestry code, which could undermine forest protection in the Amazon rainforest. Certain provisions in the forestry code require landowners in the Amazon to retain 80 per cent of their land as legal reserves.

The bill argues the provisions threaten agricultural development. The bill also proposes changes to another provision that identifies areas where native forests must be protected, including riverbanks, steep slopes and hilltops. The ruralists want that states should be given the power to reduce such areas by half if necessary. 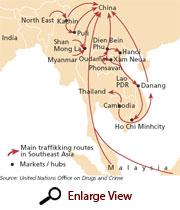 Environmental police in Vietnam seized two frozen tiger carcasses and the remains of another big cat, believed to be a panther in the central province of Nghe An. Two have been arrested in this connection. In 2009, the country’s environmental police seized three frozen tiger carcasses and 11 kg of tiger bones. Only 30 tigers survive in Vietnam’s wild. According to the UN, tiger parts fetch high prices; in China’s retail market in 2009, tiger skin fetched up to US $20,000 and bones US $1,200 per kg. 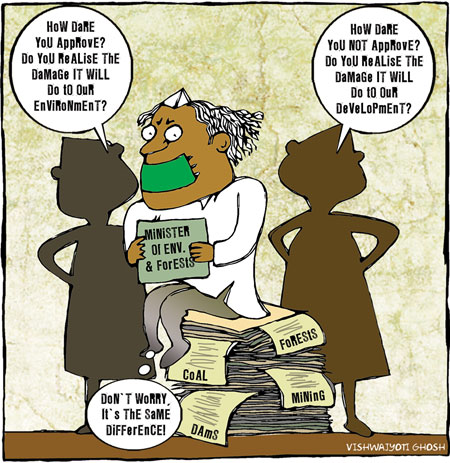