As rise in the sea level caused by global warming threatens low-lying islands across the world, Maldives is looking for a new territory to relocate to.

"Climate change will soon turn more than 300,000 islanders into environmental refugees," said Mohamed Nasheed, the country's first democratically elected president. As an insurance policy, said Nasheed, the plan is to begin diverting a portion of the country's billion-dollar annual tourist revenue and establish a fund to buy a haven, possibly in India, Sri Lanka or Australia.

Maldives is a group of 1,200 islets and coral atolls on the Indian Ocean. Of late, it has received much attention in world forums as a place that is likely to be the worst affected by a rise in the sea level.The Intergovernmental Panel on Climate Change in its latest report said that sea levels across the world could rise by 60 centimetres by 2100. The highest point in the Maldives is 2.4 metres above the sea level. 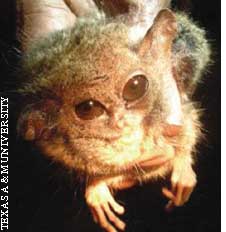 After 80 years, scientists rediscovered one of the smallest and rarest primates, Pygmy tarsier (Tarsius pumilus), in the forests of Indonesia. The 57-gramme carnivore was once abundant in the mountains of Lore Lindu National Park in Sulawesi island. Conservationists believe its population shrunk as logging destroyed its habitat.

After weeks of deliberations, the us Congress decided to delay a us $25 billion bailout plan for the country's auto industry. Congress said automakers must provide cash and sales data as well as plans for making energy-efficient vehicles--a 40 per cent increase in fuel efficiency by 2020--if they want a bailout. House Speaker Nancy Pelosi said that auto giants, General Motors, Ford and Chrysler, failed to convince Congress that an emergency aid was needed. The decision came despite intense lobbying and warning of a possible industry collapse. The auto-makers have been asked to submit the proposals by early December. If found worthy, Congress will reconvene for a special session to consider the bailout.

In a major policy shift, the Philippines is promoting organic farming. The government launched Organic Fields Support programme and allocated us $400,000 for it. The programme, jointly implemented by the Department of Agriculture and the Bureau of Soils and Water Management, aims at promoting the use of organic fertilizers and encouraging farmers to produce safe and healthy food crops. Initially, it will be implemented in six cities.

Vietnam plans to test genetically modified (gm) crops until 2010 and then grow them on a large scale. Announcing the plan at the National Assembly, agriculture minister Cao Duc Phat said that initially the country will promote gm maize, cotton and soybean. The country's Agricultural Genetics Institute has already drafted a set of regulations on assessment of gm crops. The use of biotechnology may increase Vietnam's corn output by 28 per cent, it said.

us president-elect Barack Obama could reverse some controversial policies of the outgoing president, George W Bush, including restrictions on embryonic stem cell research and oil and gas drilling in ecologically sensitive areas, shortly after taking office on January 20, 2009. His transition team is currently reviewing hundreds of Bush policies.

Obama is expected to use his executive authority to reverse Bush's order limiting federal funds for research on embryonic stem cells. The research is crucial to find cure for diabetes, Parkinson's, Alzheimer's and spinal cord injuries. Other controversial Bush policies Obama can overturn are related to abortion and family planning. Bush had banned federal funding to international family planning organizations that provided counsel on abortion. The transition team is also reviewing Bush's order that lifted restrictions on oil drilling in ecologically sensitive areas in Utah and opened 146,000 hectares in early November for exploration activities. Environmental groups had decried Bush's decision.

In the face of worsening food crisis, the un food aid agency cut rations for Zimbabwe's millions of hungry people citing fund crunch. The World Food Programme (wfp) fed two million Zimbabweans in October; it has been providing food to four million people since November. "We have to stretch the quantity of food to feed more people," said wfp spokesperson Emilia Casella. "The cereal ration has been cut from 12 kg to 10 kg a person per month and the pulses ration by almost half to one kg a person," she said. Programme officers are worried that wfp has no stocks in hand for distribution in early 2009 when the number of people needing food aid will rise to over 5.1 million--almost half the population. In October, wfp had appealed for us $140 million to fund its operations in Zimbabwe, but it is yet to receive any donation. Zimbabwe has had food shortages since 2001. Political instability and hyper-inflation--231 million per cent--has crippled the economy. 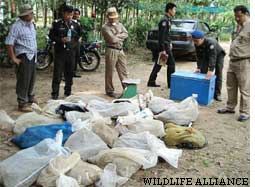 Cambodian police on November 9 seized hundreds of live turtles and pythons headed Vietnam. The shipment carried three species of turtles--yellow-headed temple turtle, Malayan snail-eating turtle and Asiatic softshell turtle--classified either endangered or vulnerable by the World Conservation Union, or iucn. It also had king cobras, reticulated pythons and Burmese pythons. The animals were packed into bags and metal tins and kept on blocks of ice to keep them cool. The reptiles have been released into a protected area near Tonle Sap Lake in Cambodia, a hot spot of illegal wildlife trade.

A few days ago, 7,000 live monitor lizards, 900 owls--plucked, wrapped in polythene and ready to cook--and other animals were seized in Malaysia. Officials found barn owls, spotted wood-owls, buffy fish-owls, barred eagle-owls and brown wood-owls and said the shipment was probably headed China, where they are sold with wine as tonics. Shipments of this size show that the trade is becoming increasingly organized by syndicates, said international wildlife trade monitoring network traffic.

Japan's greenhouse gas emissions hit a record high of 1.37 billion tonnes in the last fiscal year that ended in March. This has pushed the country, the world's fifth largest carbon dioxide producer, further from its commitments under Kyoto Protocol, the international environmental treaty. Emissions in the fiscal year 2007-2008 was 2.3 per cent more than the year before and 8.7 per cent above the 1990 levels, said the environment ministry. Under the Kyoto target, Japan must reduce its emissions by six per cent below the 1990 levels between 2008 and 2012. Industry analysts were expecting this rise as the Kashiwazaki-Kariwa nuclear plant, the biggest in the country, had suspended operations following an earthquake in July 2007. This thwarted Japan's efforts to increase carbon-free power generation.

Students at the University of Oslo, Norway, passed a resolution to restrict the dominant presence of Coca-Cola products on campus, citing the beverage company's unethical practices in India. They also adopted stringent criteria for ensuring that companies that do business with the university have strong environmental and ethical records. The university is the latest in a series of educational institutions to take action against the beverage giant.

Several communities in India have been campaigning against Coca-Cola, charging it of creating water scarcity and pollution. Two bottling plants have been shut down as a result of the campaign. A recent study has recommended the closure of another plant citing its role in worsening water shortages. "We welcome the move by students in Norway...We need such actions globally to ensure that we don't have to face another summer with little or no access to water because of Coca-Cola," said Mahesh Yogi of Kala Dera Sangharsh Samiti, a community group demanding the closure of the Coca-Cola bottling plant in Kala Dera, in Rajasthan.

fisheries
A vote to exploit tuna

Bluefin tuna in the Mediterranean will see next year's catch stretch far beyond what scientists recommend as the safe level to avoid a crash in fish stocks. Also known as northern bluefin tuna, the fish is classified as critically endangered.

The International Commission for the Conservation of Atlantic Tunas (iccat), at a meeting in Marrakesh, Morocco, set the quota for tuna fishing in the Mediterranean at 22,000 tonnes for 2009. Countries involved in the bluefin tuna trade voted to maintain catches nearly 50 per cent above what scientists recommend as the safe level. iccat's scientists had cautioned that the total allowable catch in 2009 should not exceed 15,000 tonnes. Environmental group World Wide Fund for Nature labelled the move as a "mockery of science". It blamed the eu for bullying nations such as Morocco, Algeria, Tunisia, Egypt and Syria with trade penalties into supporting the move.