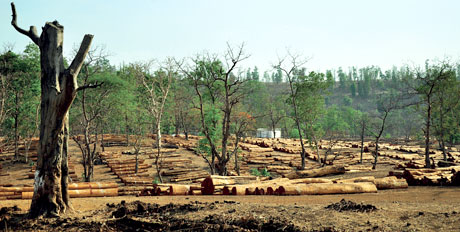 The central bench of the National Green Tribunal (NGT) has directed the Madhya Pradesh government to develop guidelines for public consultations in matters of transferring forestland (considered to be of low economic value or degraded) to the Forest Development Corporation (FDC) by the state forest department.

The order of May 8  has noted that such discussions with joint forest management (JFM) committees from the beginning of the process will ensure that the aspirations of the community find place in the forest management plans. The court has also asked the government to increase participation of local communities during the preparation of the “working plan” in forests by FDCs for enhancing the productivity of low economic value forestland.

Considering the importance of community consultation, the judgement has also directed Union Ministry of Environment and Forests (MoEF) to issue directives to states on the subject, where such working plans are submitted and seek approval of the ministry.

The order came in the wake a petition filed by Jagat Ram Chicham, chairperson of the JFM committee of Semikol village of Mandla district, who questioned the activities of the Madhya Pradesh Forest Development Corporation (MPFDC). The corporation has been carrying out forest development activities in the the Anjania and Kanchangaon ranges of Mohgaon project division. The area was handed over to MPFDC by the state forest department in 2007.

The case was initially filed in Madhya Pradesh High Court in 2013, protesting that MPFDC was causing damage to the forest area through its activities. The high court, in an interim order passed on April, 2013, restrained MPFDC from felling of trees in the area.

The bench chaired by Justice Dalip Singh has now vacated the interim order of the high court. The bench did not find merit in the applicant’s other allegations regarding unscientific forest management activities carried out by MPFDC. The MP government, in 1979, had issued guidelines on transfer of notified forest areas to the MPFDC by the state forest department on lease-rental basis for working in such areas for long term.

Following such guidelines, the state forest department has been transferring forest areas to the MPFDC in a phased manner. The judgement noted that MPFDC did prepare a working plan for the Mohgaon forest division and got it approved by MoEF, and has been carrying out activities as per provisions of the working plan.

However, the tribunal held the MPFDC accountable for falling short on the aspect of community consultation in the process of planning. Such a lapse has also created resentment among the local people.

R K Dubey, divisional manager of Mohgaon project mandal of MPFDC, however, says they have been inviting inputs from the community at several stages of the planning process for forest development. “The project has also involved local people on employment basis,” says Dubey.

The judgement has placed a lot of emphasis on the inclusion of communities for undertaking FDC activities in the country. It has called attention to the principles of the National Forest Policy, 1988, that has placed community participation at the focal point of all forest development activities. The MoEF has issued guidelines to all states in June 1990 keeping in perspective such considerations. Subsequently, various state governments have also issued orders / notifications on participatory approach of forest management and constitution of JFM committees. The setting up of JFMs has underscored the creation of a space for participatory forest management in a system dominated by a regulatory structure. The recent judgement of the NGT creates further provisions for the inclusion of communities in forest governance.

Judgement: Judgement of the National Green Tribunal regarding restraining the functioning of Madhya Pradesh Forest Development Corporation from cutting the trees in the forest, 08/05/2014