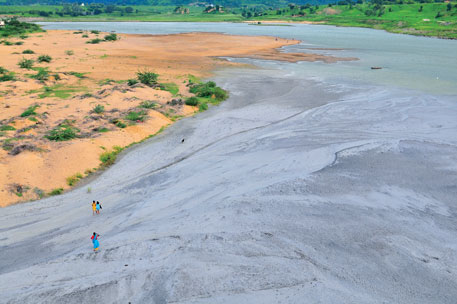 The National Green Tribunal has ordered an investigation into fly ash pollution and its management in Singrauli industrial region in central India. This is just a week after the National Green Tribunal (NGT) ordered polluting industries in Singrauli to provide clean drinking water to the residents of the area or face closure. The bench chaired by Justice Swatanter Kumar passed the separate order on fly ash pollution on Wednesday.

The region is known for its coal reserves and is the energy capital of the country, generating about 10 per cent of India's coal-based power. But its people are extremely poor and suffer from severe pollution, including mercury poisoning.

Earlier in March this year, a report by the NGT appointed committee chaired by A B Akolkar, member secretary of CPCB, had identified a serious lapses in disposal and management of fly ash in the area. Dry abandoned ash ponds were found to be left open without provision of proper vegetation cover. Trucks, often burdened with excess loads of coal and without proper cover, were noted to be adding to the pollution burden during transportation.

“The latest directive of the bench puts much emphasis on identifying the industries that are contributing to such pollution and what measures they are taking,” says Ashwani Dubey, resident of Singrauli and also the petitioner and advocate in the case. The bench has also asked the probe team to look into issues such as occurrence of fly ash in agricultural fields, and management of ash ponds and fly ash silos.

Water pollution follow up measure
The tribunal also revisited matters of water pollution during the deliberations. Following its earlier order of May 13, the bench directed the secretary of state public works department, secretary for environment and the public health engineer to hold a meeting with all the thermal power plants and big industries of the area and to resolve all issues to ensure the implementation of water purification measures.  The measures are to be implemented by industries both in Madhya Pradesh and Uttar Pradesh; the Singrauli industrial area is spread over the two states.

Prompt action necessary
The pro-activeness shown by the tribunal to consider matters of pollution is Singrauli is certainly encouraging. People of the region has suffering for years and no action was taken by authorities in spite of the region being identified as a “critically polluted area” by CPCB. Though investigations certainly would be helpful in further identifying the extent of pollution, what is needed is prompt action to mitigate pollution.

Order of the National Green Tribunal regarding the pollution of Gobind Vallabh Pant Sagar (Rihand Reservoir) caused by industries, 13/05/2014