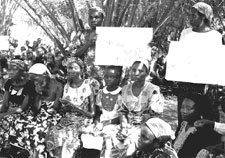 The people of Ogoniland in Nigeria are protesting against a award being presented to Royal Dutch Shell, the multinational oil giant. The company is being given the award by the us-based World Environmental Centre (wec) for environmental efficiency. Ogoniland, located in Nigeria's south-eastern River State, has large oil reserves and these have been indiscriminately exploited for centuries by many multinational oil companies, most prominently by Shell (see 'A tale of two peoples', Down To Earth, Vol 4, No 14, December 15, 1995). This has led to extensive environmental degradation of the area. "The award will encourage Shell to continue its destructive activities," alleges Noble Obani-Nwibani, president of a faction of the Movement for the Survival of the Ogoni People. He described the wec decision as "environmental racism."