Nipping malaria in the bud

Scientists are focussing on strengthening genetically the defence mechanism of mosquitoes so as to render them inhospitable to the malarial parasite. 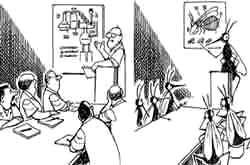 WITH THEIR earlier attempts to conquer malaria having fallen through, researchers are now toying with a novel approach -- altering the mosquito's genetic make-up so that it cannot carry the parasite it now transmits to humans.

Exterminating mosquitoes to check the spread of malaria has been the main goal of researchers so far. But the wily insects have managed to dodge every missile fired at them. First, they evolved resistance to DDT and then foiled scientists' attempts to make them sterile by breeding too fast for the strategy to take effect. The battle became even more one-sided when the malaria parasite joined hands with its carrier, the mosquito, in developing resistance to drugs and vaccines.


But now biologists have discovered a powerful weapon -- transgenic mosquito strains that are incapable of transmitting the disease -- that they believe should be effective against malaria. Their aim is to discover genes that can make the mosquito immune to the malaria parasite as well as to find ways of spreading these genes through insect populations in the wild.

Recently, a research team, under the aegis of MacArthur Foundation of USA and Wellcome Trust of the UK, achieved a major breakthrough when it charted the genetic map of the X chromosome of Anopheles gambiae, an African mosquito that carries the malaria parasite and is notoriously difficult to control through conventional methods. The map could lead to the discovery of key genes that can be manipulated to reduce malaria transmission, says biologist Frank Collins of the Centers for Disease Control and Prevention in Atlanta, USA, a participant in the MacArthur programme.

Another member of the team, Fotis Kafatos, director general of the European Molecular Biology Laboratory in Germany, expects to chart the genetic maps of the other two An. gambiae chromosomes within a year. Then "we will be in a position to map the insect's traits very effectively," he says.


Earlier, Collins had bred a strain of An. gambiae that disables the malaria parasite when it is very young. The parasite can infect humans only after they mature into adults inside the insect's body. Collins' malaria-resistant mosquitoes halt the parasite's developmental process by imprisoning the young parasites in a capsule made from the pigment, melanin -- a spectacular effect that is due to the enhancement of the mosquito's normal defences against infection.

Collins is trying to find the genes that could enhance this effect against malaria. He is hopeful that the complete genetic map of the mosquito will eventually lead to the genes that underlie the strain's parasite resistance. Other anti-malaria crusaders are following a different line of attack: Rather than searching for anti-malaria genes in An. gambiae itself, they want to introduce foreign genes into the mosquito to make it resistant to the malaria parasite. Molecular geneticist Julian Crampton of the Liverpool School of Tropical Medicine and cell biologist Robert Sinden of London's Imperial College may have the ideal candidate: a mammalian immune system gene that produces the antibody against a malarial antigen carried by the young parasite.

But before Crampton can test his strategy, he must find a reliable way to insert foreign genes into the mosquito. While some biologists are trying the conventional approach of using a class of viruses, called retroviruses, to smuggle genes into mosquito chromosomes, a majority of them are relying on a genetic technique in which foreign genes are spliced into fragments of DNA known as transposable elements. If a transposable element could be used to insert genes into An. gambiae, the resulting transgenic insects when released would spread the element through the wild population.