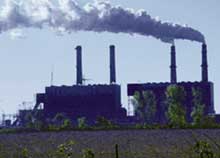 increasing atmospheric concentration of nitrogen threatens plant species in sensitive ecosystems in the developing world, claims a recent study. The Western Ghats and Sri Lanka are likely to be the worst affected.

Researchers studied the nitrogen concentration over 34 biodiversity hot spots, which account for almost 50 per cent of world's floristic diversity. They discovered that some sites were already receiving potentially damaging amounts of nitrogen, a phenomenon that has caused loss of plant species in parts of Europe and North America. The global study was published in Global Change Biology (Vol 12, No 3, March 2006).

Led by scientists in the uk, the study used emissions prediction models to estimate current nitrogen concentration and likely changes by 2050. Nitrogen is emitted from human activities such as fossil fuel burning, livestock farming and fertiliser use in agriculture. Rain can deposit it on the earth, where it can cause a spurt in growth of some species, which can threaten sensitive plants with extinction. But an Indian scientist says the effect in tropical areas may not be as high as in colder regions. "The impact of nitrogen deposition is limited by deficiency of certain nutrients like phosphorus in the soil (in tropical areas)," says K P Singh of the Banaras Hindu University.

The study found that by 2050, average nitrogen deposition in the hotspots studied may rise to as much as 11.8 kg nitrogen per hectare (ha) per year from a figure of 5.3 in the mid-1990s. In four hotspots -- the Western Ghats and Sri Lanka, Indo-Burma, Atlantic Forest, Mountains of Southwest China -- the figure may exceed 20. And, in the Western Ghats and Sri Lanka, it is predicted to go as high as 34.